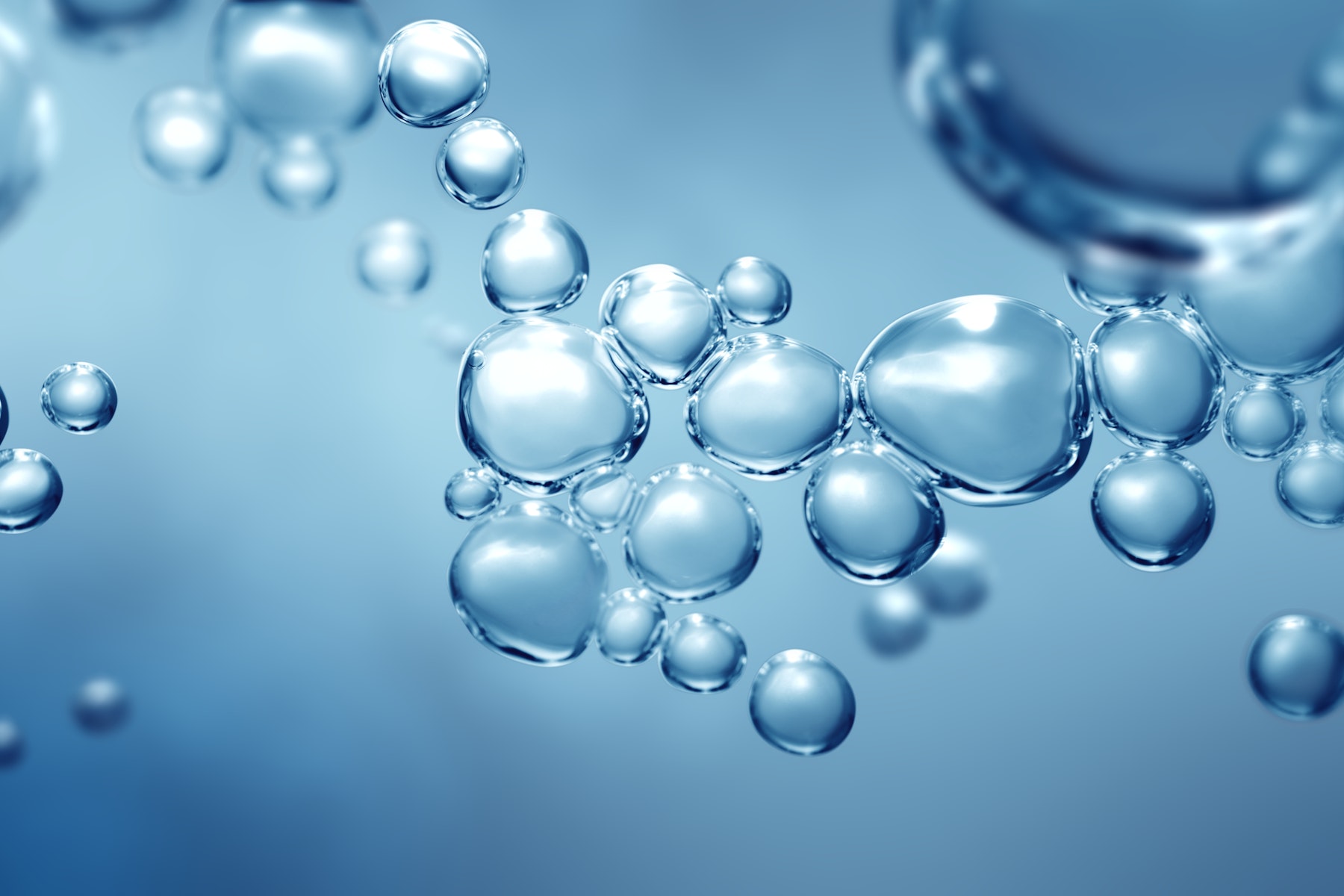 Hydrogen as a clean energy vector still has significant progress to make to get on track with the Net Zero Emissions by 2050 Scenario. In 2021 hydrogen demand was almost entirely met by unabated fossil fuel-based hydrogen. The production of low-emission hydrogen was around 0.6 Mt in 2021 (less than 1% of global hydrogen production). But a significant number of projects are under development, which are expected to increase output faster in the short term. The realisation of all the projects in the pipeline could lead to more than 24 million tonnes of low-emission hydrogen produced annually by 2030, 40% higher than the expectations from last year. Getting on track with the Net Zero Scenario requires the production of low-emission hydrogen to be scaled up to reach total production of 95 Mt by 2030, as well as calling for the enabling infrastructure, including hydrogen-dedicated infrastructure, renewable generation capacity and CO2 transport and storage infrastructure.

Emissions of CO2 associated with hydrogen production reached more than 900 Mt CO2 in 2021, an increase of around 6% compared with 2020. This means that the increase in hydrogen production and demand observed in 2021 were not beneficial to the fight against climate change. The positive trends observed in areas such as electrolyser deployment are still taking place at a very small scale.

Hydrogen production today is primarily based on fossil fuel technologies, with over a sixth of the global hydrogen supply coming from “by-product” hydrogen, mainly from facilities and processes in the petrochemical industry.

Getting on track with the Net Zero Scenario requires the rapid scale-up of low-emission hydrogen, which leads to a remarkable increase in electricity demand in the short term. Around 40% of the global energy demand for hydrogen production in 2030 is met by electricity. This requires significant deployment of dedicated renewable capacity for hydrogen production and enhancement of the power grid. In the Net Zero Scenario, around 2700 TWh of renewable electricity is used by 2030 to produce hydrogen.

By 2030 natural gas demand for hydrogen production is almost 60% higher than in 2021 in the Net Zero Scenario. In contrast, coal demand drops by 10%. In both cases, newly deployed production capacity is equipped with CCUS and a fraction of existing facilities still operational in 2030 are retrofitted with CCUS. Biomass consumption triples, but still represents barely 0.1% of global energy demand for hydrogen production.

The technologies for the production of low-emission hydrogen are at different stages of development. For electrolysis technologies, alkaline and proton exchange membrane (PEM) electrolysers are commercially available, although they are still not competitive with conventional unabated fossil-based technologies. Solid oxide electrolyser cells (SOEC) are still under demonstration and anion exchange membrane (AEM) electrolysers are at prototype level. However, these technologies are observing rapid development. For AEM technology, Enapter and Alchemr already have available prototypes at the kilowatt scale and Enapter aims to produce them at scale from 2023.

Technological development is taking place across all hydrogen supply technologies, although some key technologies are still far from becoming commercial 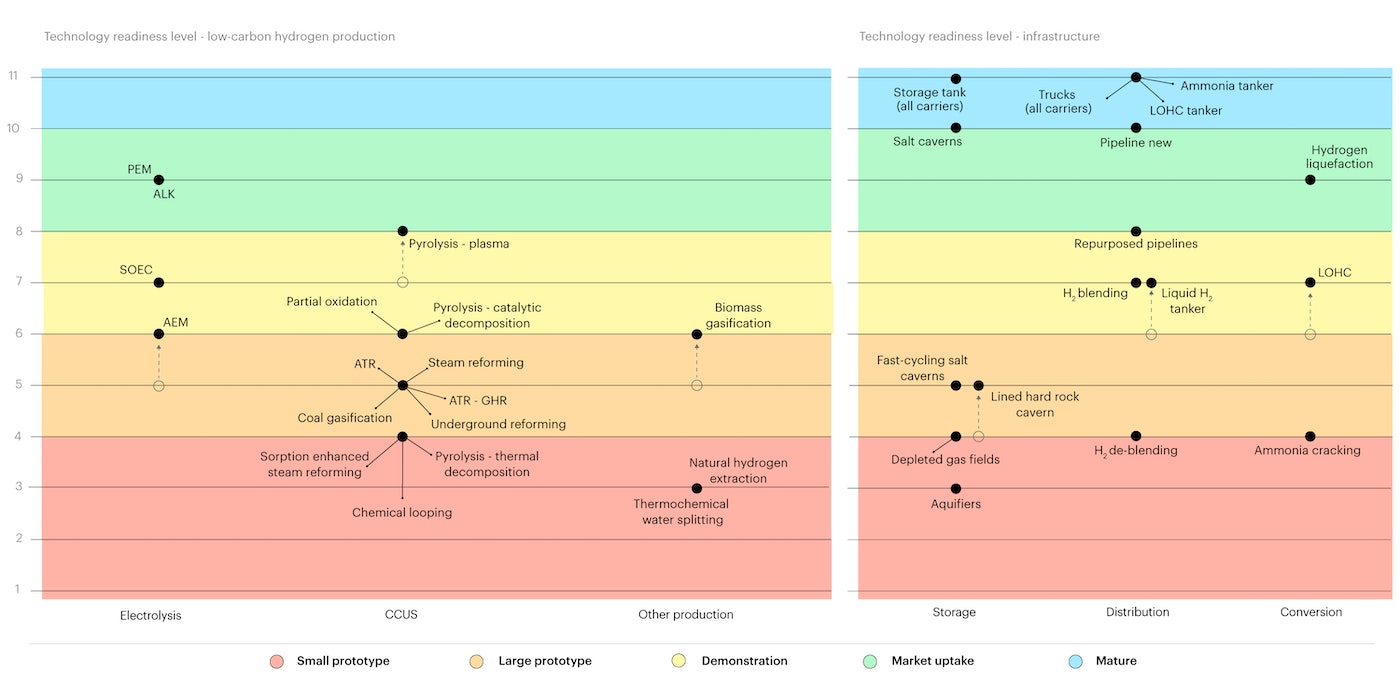 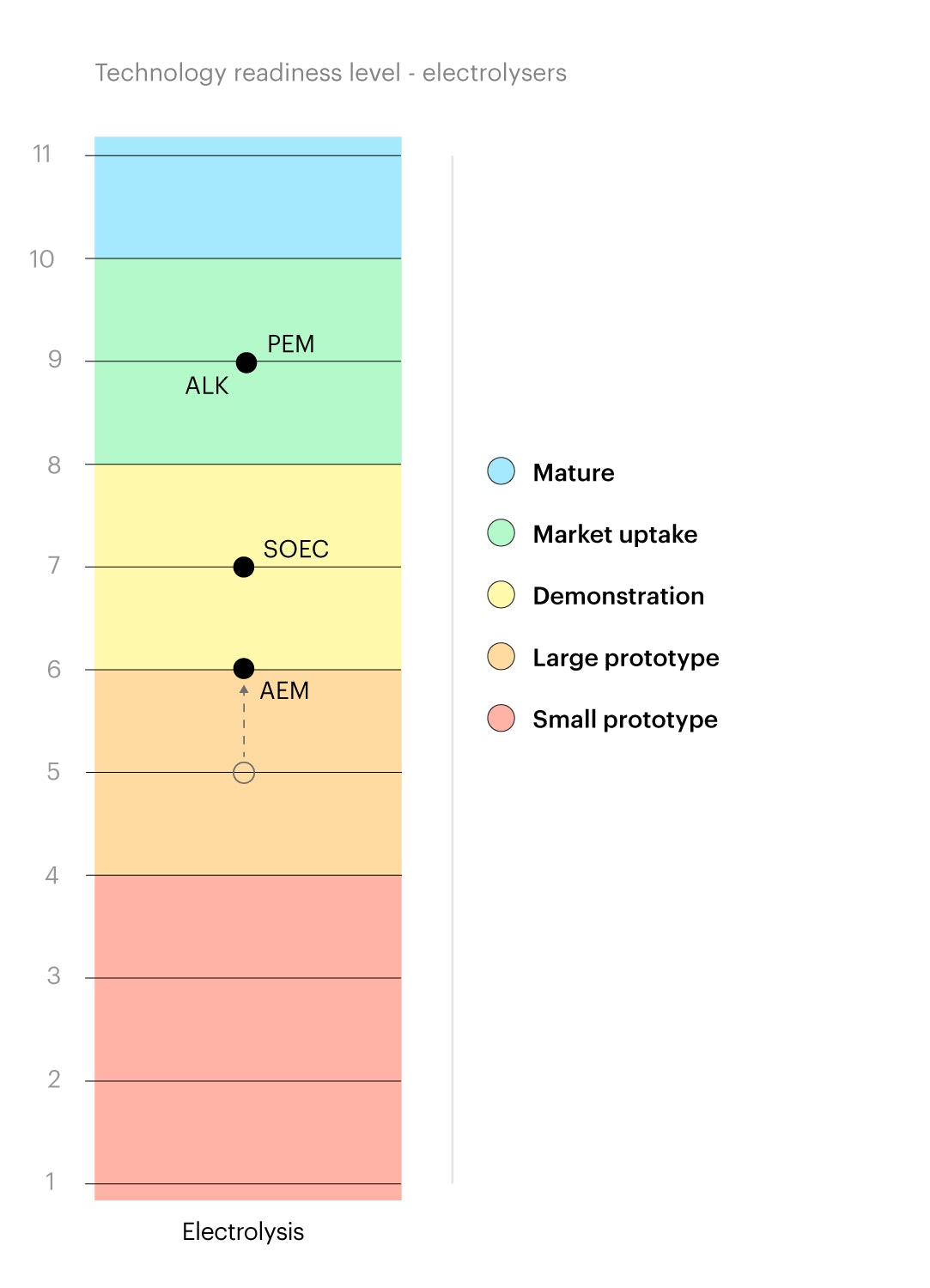 As regards fossil fuels with CCUS, technologies with partial capture of CO2 (around 60%) are commercially available and well established for the co-production of ammonia and urea. However, the production of low-emission hydrogen requires much higher capture rates, which have not been demonstrated yet. These technologies are currently at pre-demonstration level and no projects are at the advanced stages of development or expecting to demonstrate them soon. In the case of biomass-based routes, although also less developed than other low-emission hydrogen production technologies, they have registered some progress this past year with full prototypes entering operation in Japan and France.

Hydrogen infrastructure technologies are more developed than other areas of the hydrogen value chain. There are several fully commercial technologies, such as pipes for hydrogen transport, and pressurised tanks and salt caverns for bulk hydrogen storage. However, efforts are still required to bring certain critical technologies to commercialisation or to scale up commercial technologies (such as liquefaction). This year has registered major milestones in technological development. In February 2022 the Suiso Frontier, a liquefied hydrogen tanker developed by Kawasaki Heavy Industries, completed the first shipment between Australia and Japan.

Currently hydrogen is mostly produced and consumed in the same location, without the need for transport infrastructure. With demand for hydrogen increasing due to decarbonisation pledges and the advent of new distributed uses, there is a need to develop hydrogen infrastructure that connects production and demand centres.

Transporting hydrogen via pipeline is generally cost-competitive up to a distance of 5 000 km. About 2 600 km of hydrogen pipelines are in operation in the United States and 2 000 km in Europe, mainly owned by private companies and utilised to connect industrial users. Several countries are developing plans for new hydrogen infrastructure, with Europe leading the way. The European Hydrogen Backbone initiative groups together 31 gas infrastructure operators with the aim of establishing a pan-European hydrogen infrastructure. In June 2022 the Dutch government announced plans to develop a national hydrogen transmission network of 1 400 km, with initial parts to be completed by 2026.

For distances over 5 000 km, shipping hydrogen and hydrogen carriers are more cost-competitive than hydrogen pipelines. In February 2022 the Hydrogen Energy Supply Chain demonstrated for the first time the shipment of liquefied hydrogen (75 tonnes of LH2 from Australia to Japan) and it plans to scale up operations by the end of the decade. However, the extremely low temperature needed to ship liquefied hydrogen (-253°C, compared to -162°C for LNG) makes its transportation over long distances challenging and costly. For this reason a growing number of projects are considering the possibility of transporting ammonia, such as the ACE Terminal in the Netherlands and the NEON project in Saudi Arabia. However, all these projects are still under development and their realisation would depend on a number of factors, including the development of the required infrastructure (particularly import and export terminals), the creation of demand for hydrogen and hydrogen-based fuels, the development of standards, certification schemes and adequate regulatory framework, and the adoption of supporting policies.

The development of infrastructure for hydrogen storage will be also needed. Salt caverns are already in use for industrial-scale storage in the United States and the United Kingdom. The potential role of hydrogen in balancing the power grid, helping deal with the short- and long-term variability of renewables and the potential development of international trade would all require the development of more storage capacity and its flexible operation. Several research projects are ongoing for the demonstration of fast cycling in large-scale hydrogen storage, such as HyCAVmobil in Germany and HyPSTER in France, with both tests planned to start by 2023. Other research projects in the Netherlands, Germany and France are also working on analysing the potential for repurposing natural gas salt caverns for hydrogen storage.

Infrastructure for hydrogen and hydrogen-based fuels remains very limited, but its scale-up is crucial as new distributed applications arise

The deployment of hydrogen production capacity using fossil fuels with CCUS has received less attention than electrolysis, and only two countries (Colombia and Slovakia) have explicit targets. Other countries such as Canada have followed a different approach, avoiding technology-specific targets. The Canadian strategy envisages an increase in total hydrogen production (to 4 Mt by 2030) combined with a simultaneous decrease in the carbon intensity of the hydrogen produced (to under 36.4 g CO2-eq/MJ by 2025), without distinguishing between different production routes.

Governments have significantly raised their ambitions for the deployment of low-emission hydrogen production technologies, particularly electrolysis

Many projects under development are first-movers and face a combination of risks associated with uncertain demand, unclear regulatory frameworks, lack of infrastructure and non-existent operational experience. Governments can support project developers by adopting policies that help them to mitigate risk and leverage private investment. Several governments have begun to implement such policies in the form of grants, loans, tax breaks and carbon contracts for difference (CCfDs). Activity has been particularly intense over the last year, with several significant announcements:

The emergence of low-emission hydrogen markets will require relevant standardisation bodies to develop international standards to remove and/or reduce regulatory barriers. The development of standards to account for greenhouse gas emissions over the life cycle of hydrogen and its derivatives is of particular urgency. At the International Organization for Standardization (ISO) Technical Committee for hydrogen technologies, there is a new proposal on a “Methodology for determining the greenhouse gas emissions associated with the production and transport of hydrogen”. Given the urgency of this matter for the development of regulatory frameworks, the committee is seeking to develop a draft technical specification by end of 2023 and a draft international standard by the end of 2024. This initial draft will be instrumental in providing the best practice methodology to be taken up by early movers.

In parallel with the development of standards, governments are working on the establishment of certification schemes:

However, the methodologies defined for these certification schemes are not necessarily aligned, using different system boundaries or establishing different carbon intensity thresholds to be certified. This may become an important barrier as the investments that will lead to trade in low-emission hydrogen will rely on international recognition of standards and certificates.

Over the past year, 15 new bilateral international agreements between governments have been signed, most of them focused on the development of international hydrogen trade. In the private sector, companies have joined forces to develop first-of-a-kind technologies, with the Port of Rotterdam being the most active organisation on this front, with several memorandums of understanding and partnerships in place, mostly with the objective of exploring opportunities to import hydrogen.

International cooperation keeps growing, both in the public and the private sectors

Stimulating demand may prompt investment in these areas, but without further policy action, this process will not happen at the necessary pace to align with the Net Zero Scenario. Providing tailor-made support to selected, shovel-ready flagship projects can kick-start the scaling up of low-carbon hydrogen and the development of infrastructure and manufacturing capacity from which later projects can benefit.

The adoption of hydrogen as an energy vector will result in the development of new value chains. This will require the modification of current regulatory frameworks and the definition of standards and certification schemes that can remove barriers preventing widespread adoption. There is a need to accelerate the development of standards, backed by standardisation organisations, for determining the carbon footprint of hydrogen production. This is to ensure that hydrogen production is truly low emission and to assist the development of a global hydrogen market. Governments should work together to align to the extent possible the methodologies and thresholds defined in their certification schemes and regulations or, at least, to facilitate recognition among them to ensure that the use of different standards and certificates does not become a barrier for the development of international trade.

The adoption of low-emission hydrogen as a clean energy vector presents technological challenges. First movers will face risks due to a lack of knowledge and market uncertainty; however, completing demonstration projects to gain operational experience and develop in-house know-how can position them ahead of their competitors at the moment when deployment of the technology scales up.

The IEA Hydrogen Technology Collaboration Programme aims to accelerate the deployment and use of hydrogen technologies by carrying out and co-ordinating collaborative analysis, applied research and communications.