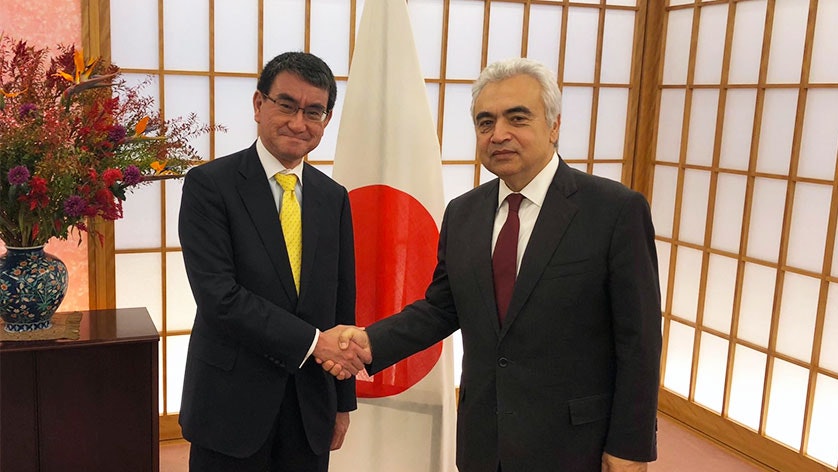 “Japan’s Hydrogen Energy Ministerial is a critical milestone to send a strong signal to governments and companies around the world,” said Dr Birol in his keynote address. Dr Birol highlighted the role that hydrogen can play in global clean energy transitions while at the same time increasing energy security by diversifying the fuel mix.

Dr Birol highlighted the three pillars of the IEA’s modernisation strategy: “opening the doors” to emerging economies, broadening its approach to energy security and becoming the clean energy hub, and how these feed into the IEA Clean Energy Transitions Programme. Dr Birol and Minister TarÅ also discussed how the IEA will support Japan’s G20 Presidency in 2019 through work on energy efficiency and hydrogen.

Prior to his visit to Tokyo, the Executive Director was in Nagoya to give the keynote speech at the LNG Producer-Consumer Conference 2018 and meet with Mr Hiroshige Seko, Minister of Economy, Trade and Industry.

In his meeting with Minister Seko, Dr Birol emphasized the IEA’s support for Japan’s upcoming G20 presidency, in particular highlighting the IEA’s commitment to energy efficiency policy guidance and upcoming work on the future of hydrogen and energy in support of the G20 Summit to be held in June 2019.

Following this meeting, Dr Birol provided a keynote address to the LNG Producer-Consumer Conference to an audience of over 1000 participants. Dr Birol highlighted the bright future for LNG, noting that the number of LNG importers is projected to rise from 10 in 2000 to nearly 50 in 2023.

On Monday afternoon, Dr Birol visited Toyota headquarters in Toyota City, meeting with Toyota Chairman Mr Takeshi Uchiyamada. Dr Birol and Mr Uchiyamada discussed the promise of electric and fuel cell transport, including hydrogen. Dr Birol emphasized how the IEA considers hydrogen and fuel cell technology to be an important option for clean mobility and mitigating the growth in oil demand. Dr Birol was then given a tour of the Toyota plant where he had the opportunity to view first-hand the manufacture of next-generation vehicles.