Clean electrification is a central element in all scenarios in this Outlook, but it is not possible to electrify everything. Even in the NZE, electricity comprises less than 50% of total final energy consumption in 2050: in the APS and the STEPS the comparable figures are 31% and 26%. Liquid, gaseous and solid fuels of various types will continue to make a major contribution to the global energy mix through to 2050.

Oil demand, for the first time, shows an eventual decline in all scenarios in this Outlook, although the timing and sharpness of the drop vary widely. In the STEPS, demand levels off at 104 mb/d in the mid-2030s and then declines very slightly to 2050. Oil use in road transport increases by around 6 mb/d through to 2030, with a particularly sharp rise in 2021, and it increases by close to 8 mb/d in aviation, shipping and petrochemicals. In the APS, global oil demand peaks soon after 2025 at 97 mb/d and declines to 77 mb/d in 2050. Oil use falls by around 4 mb/d in countries with net zero pledges between 2020 and 2030, but that is offset by an 8 mb/d increase in the rest of the world. In the NZE, oil demand falls to 72 mb/d in 2030 and to 24 mb/d by 2050. By 2030, 60% of all passenger cars sold globally are electric, and no new ICE passenger cars are sold anywhere after 2035. Oil use as a petrochemical feedstock is the only area to see an increase in demand; in 2050, 55% of all oil consumed globally is for petrochemicals.

Natural gas demand increases in all scenarios over the next five years, with sharp divergences afterwards. Many factors affect to what extent, and for how long, natural gas can retain a place in the energy mix when clean energy transitions accelerate, and the outlook is far from uniform across different countries and regions. In the STEPS, natural gas demand grows to around 4 500 bcm in 2030 (15% higher than in 2020) and to 5 100 bcm in 2050. Use in industry and in the power sector increases to 2050, and natural gas remains the default option for space heating. In the APS, demand reaches its maximum level soon after 2025 and then declines to 3 850 bcm in 2050: countries with net zero pledges move away from the use of gas in buildings, and see a near 25% decrease in consumption in the power sector to 2030. In the NZE, demand drops sharply from 2025 onwards and falls to 1 750 bcm in 2050. By 2050, more than 50% of natural gas consumed is used to produce low-carbon hydrogen, and 70% of gas use is in facilities equipped with CCUS.

Coal faces structural decline in all scenarios. In the STEPS, global coal demand rises slightly to 2025 and then starts a slow decline to 2050 when it is around 25% lower than in 2020. Between 2025 and 2030, total coal demand in China starts to fall and there are large reductions in coal use in advanced economies, mainly as a result of lower demand in the power sector. In the APS, global coal demand in 2030 is only 6% lower than in the STEPS because more than 80% of coal demand today comes from countries that do not have net zero pledges or aim only to reduce emissions after 2030. But it declines rapidly after 2030, notably in China, and global demand in 2050 is only half what it was in 2020. In the NZE, global coal demand drops by 55% to 2030 and by 90% to 2050; in 2050, 80% of the small remaining amount of coal still being used is equipped with CCUS.

In the STEPS, the increase in oil demand means oil prices rise to around USD 77 per barrel in 2030. Tight oil operators in the United States choose to prioritise returns over production growth, and tight oil satisfies much less of the increase in global oil demand than in the past. OPEC production increases by around 6 mb/d to 2030, and Russian production is maintained: OPEC and Russia together provide 48% of total oil supply in 2030, an increase from 2020 but well below their share during much of the last decade. Internationally traded volumes of natural gas expand by over 240 bcm between 2020 and 2030. Australia remains the largest exporter of coal although exports fall by around 5% to 2030.

In the APS, producer countries with net zero pledges pursue efforts to minimise emissions from oil and gas operations. This increases their production costs relative to other producers as well as their financing costs, but some remain competitive and are able to increase exports of oil and gas when domestic demand declines faster than supply: for example, in 2030 the United States exports 3.5 mb/d of oil and 200 bcm of natural gas in the APS (compared with 2.5 mb/d of oil and 220 bcm of natural gas in the STEPS). This puts downward pressure on prices, and limits export opportunities for a number of new and emerging producers. OPEC and Russia together provide 48% of total oil supply in 2030. Internationally traded natural gas volumes grow by 160 bcm between 2020 and 2030, while the drop in coal demand in countries with net zero pledges mean that coal exports fall from all producers. 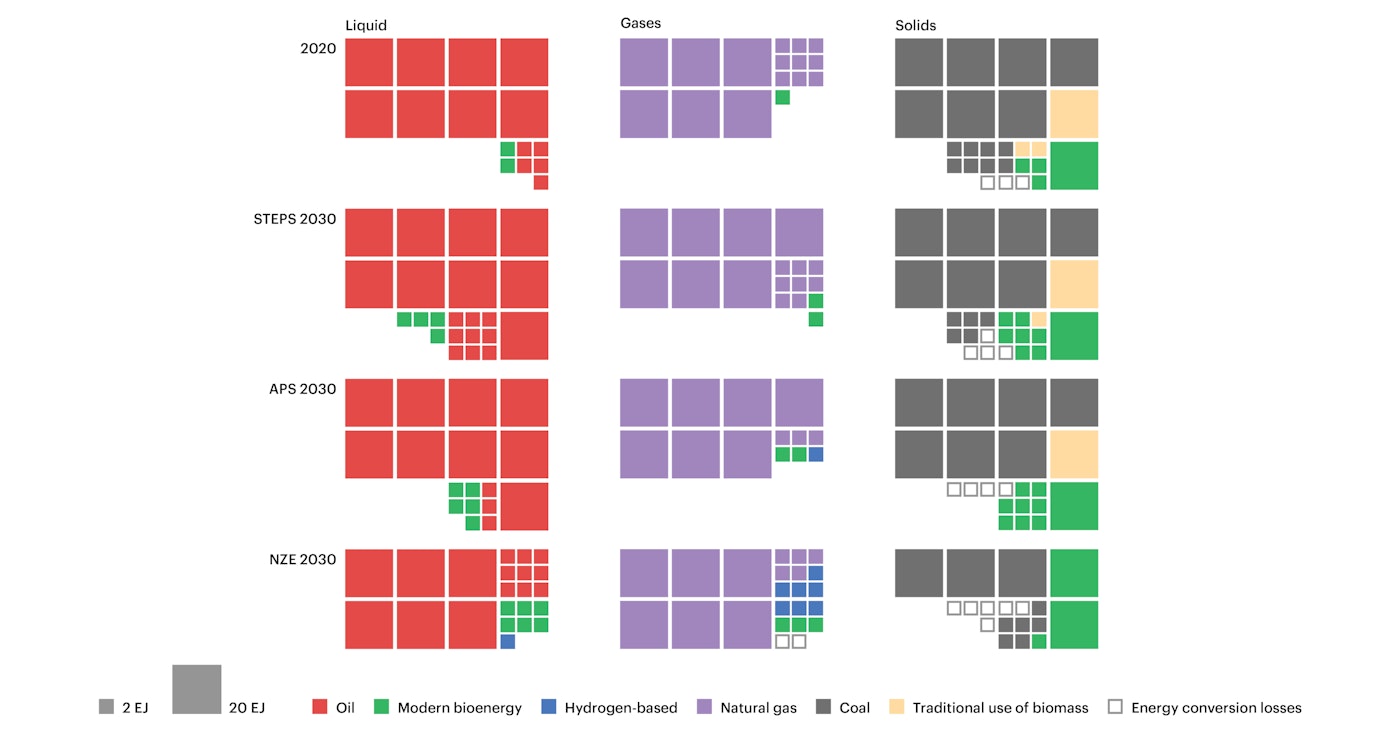 Energy conversion losses = fuel consumed in the transformation process to produce other liquid, gaseous or solid fuels for final consumption.

Minimising methane leaks and flaring should be a top priority in the quest to reduce emissions from fossil fuel operations. On average, we estimate that 8% of natural gas and natural gas liquids entering flares are not combusted and leak into the atmosphere. This is more than double previous estimates, and suggests that flaring resulted in more than 500 Mt CO2-eq GHG emissions in 2020, which is more than the annual CO2 emissions from all cars in the European Union.

There is a growing role for alternative, low emissions fuels such as modern bioenergy and hydrogen-based fuels in all scenarios. These play a key role in the achievement of net zero targets, especially in sectors where direct electrification is most challenging. Policy support for these low emissions fuels varies significantly among countries, with most recent attention paid to low-carbon carbon hydrogen, but the use of modern bioenergy also grows substantially. Just under 2 mb/d of biofuels were used in 2020, but volumes double to 2030 in the STEPS, increase by two-and-half times in the APS and triple in the NZE. The use of modern forms of solid bioenergy increases by 30-70% across the scenarios to 2030. In the NZE, biogas provides clean cooking access for 400 million people in 2030, and total biogases demand rises to 5.5 EJ.

Today, 17 governments have published low-carbon hydrogen strategies and more than 20 countries are developing them. These strategies mainly focus on targets for hydrogen supply, although attention is increasingly being paid to the policies needed to stimulate demand both for low-carbon hydrogen and hydrogen-based liquids, including ammonia, methanol and other synthetic liquid hydrocarbons with a very low emissions intensity.

Is there a pot of hydrogen at the end of the rainbow?

Progress in the decade to 2030 will be critical to the later success of low-carbon hydrogen and hydrogen-based fuels. Success will depend on major investments in innovation to lower the costs of production and in transport to ensure that new end-user equipment and vehicles quickly become available on the market. There are likely to be large regional variations in production costs for hydrogen and hydrogen-based fuels, and imports could be more economically attractive than domestic production for some countries.