IEA Chief Economist Fatih Birol received the Japanese Emperor's Order of the Rising Sun at a ceremony hosted by Ambassador Kazuo Kodama of Japan in Paris on 30 January.

The honour was awarded in recognition of the guidance Dr. Birol has provided to Japanese policy makers for close to two decades on issues of energy security, environmental protection and economic development through his work leading the World Energy Outlook (WEO).

Mr. Shinichi Kihara, IEA Governing Board representative of Japan, was present at the ceremony to deliver messages of appreciation from Mr. Motegi, Minister for Economy, Trade and Industry, and Mr. Ueda, Commissioner of the Agency for Natural Resources and Energy. Other attendees included ambassadors and members of the IEA Energy Business Council as well as IEA staff, including past and present members of Dr. Birol’s team.

In his acceptance speech, Dr. Birol dedicated the award to his father, Professor Kemal Birol. 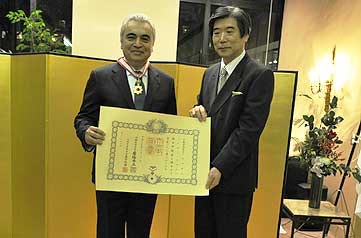