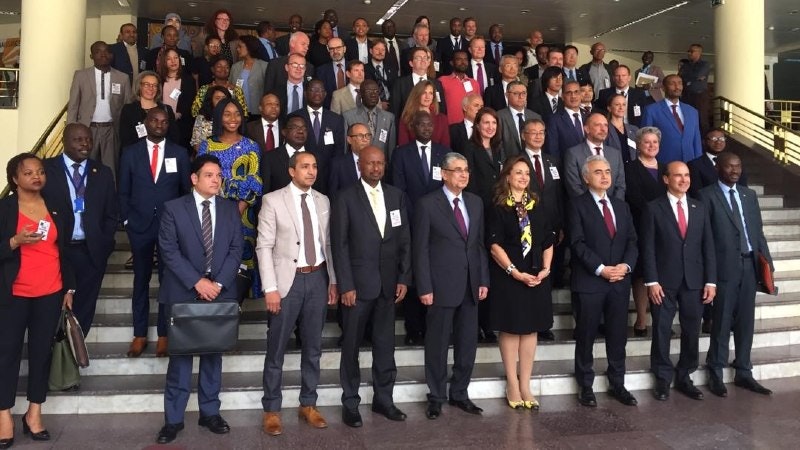 Representatives from government and industry across Africa attended the historic event, which demonstrated the IEA’s increased regional engagement. (Photograph: IEA)

ADDIS ABABA, Ethiopia – The International Energy Agency co-hosted a joint ministerial summit with the African Union Commission (AUC) on Wednesday that brought together high-level representatives from government and industry to discuss the development of Africa’s energy sector.

The event, titled “The Future of Africa’s Energy,” is the first of its kind and reflects the IEA’s significant expansion of its engagement in Africa.

Wednesday’s discussions will help to inform a special report on Africa in the 2019 edition of the World Energy Outlook, the IEA’s flagship publication. They will also help the IEA to determine the next steps in its engagement with African Union members and in its work on several key Africa programmes in the years ahead.

“This historic meeting is a milestone for the IEA’s cooperation in Africa, a continent that is of critical importance in the global energy arena,” said Dr Fatih Birol, the IEA’s Executive Director. “I’m honoured to have been able to participate in such rich and fruitful discussions with major energy stakeholders from across the continent. African Union Commissioner Dr Amani Abou-Zeid has been a good friend and strong supporter of the IEA, and we are grateful to her and her team for working with us to deliver such a productive event.”

The IEA and the AUC plan to hold a second ministerial forum on Africa’s energy sector in Paris next year.

The IEA has been working on Africa-related issues for many years, including capacity building for energy statistics as well as focusing on energy access, clean cooking and energy efficiency. The agency has been collecting country-by-country data and developing a long-term pathway for achieving universal energy access by 2030.

“Investment, innovation and access to education and training will be vital for Africa’s energy future,” Dr Birol said. “The IEA is fully committed to providing support and advice to help achieve positive, sustainable and prosperous transitions across the continent.”

This week, the IEA announced that Dr Kandeh Yumkella, a former United Nations Under-Secretary-General, will become an advisor on Africa and energy access issues.

The IEA is also launching two 3-year projects in Africa in 2019 that will focus on energy statistics and modelling, as well as energy policy advice. In the past few years, Morocco and South Africa have joined the IEA family as Association countries.

This year, the IEA chaired the latest edition of the inter-agency Tracking SDG7 report, which it co-authored with four other international organisations. The United Nations Sustainable Development Goal (SDG) 7 aims to ensure affordable, reliable, sustainable and modern energy for all by 2030.

This year’s tracking report found that without more sustained and stepped-up actions to meet those targets, 650 million people around the world will be left without access to electricity in 2030. Nine out of 10 of them will be living in sub-Saharan Africa.