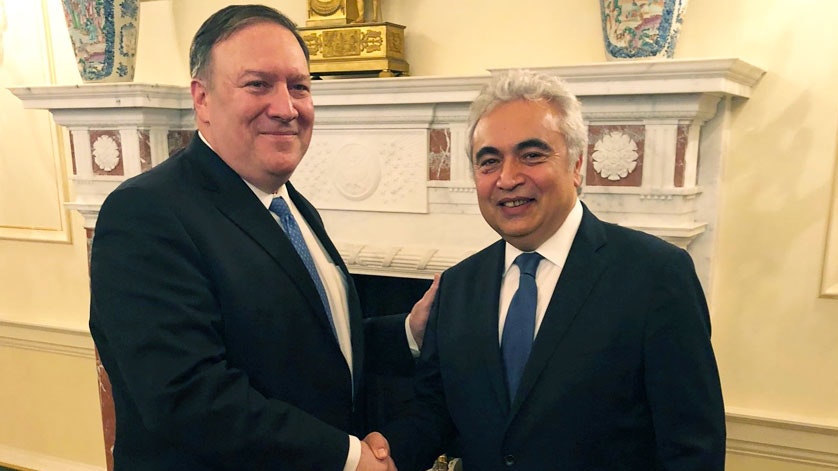 WASHINGTON – Dr Fatih Birol, the Executive Director of the International Energy Agency, met with US Secretary of State Mike Pompeo at the State Department on Tuesday during a two-day visit to the United States.

Dr Birol and Secretary Pompeo discussed recent developments in the global gas markets, as well as the critical role of the IEA for global energy security and plans for advancing the agency's modernization agenda.

He also met with US Secretary of Energy Rick Perry, and discussed the growth in energy production from the United States in recent years, a key topic of analysis for the IEA.

During his visit to Washington, Dr Birol also launched the IEA’s latest gas market analysis, Gas 2018, at the World Gas Conference. In a plenary address before 500 guests, Dr Birol emphasized the growing role of gas and LNG in the global energy balance, and spoke about the need to increase energy access around the world, especially access to electricity in Sub-Saharan Africa, a topic he said that the IEA is committed to helping address.

The report found, among other things, that within five years the United States will account for close to three-quarters of all LNG export growth and its market share will jump to 20% in 2023, from 4% today. China is also set to dominate the growth in global gas demand in the next five years and becomes the largest natural gas importer by 2019.

During the visit to Washington, Dr Birol held several high-level bilateral meetings, including with Jim Carr, Canada’s Minister of Natural Resources; Parviz Shahbazov, the Energy Minister of Azerbaijan; Frank Fannon, the Assistant US Secretary of State; and Darren Woods, the Chairman and Chief Executive of ExxonMobil.

He appeared at the Atlantic Council’s Energy Advisory Group on a panel that included the US Deputy Secretary of Energy Dan Brouillette, Mr Fannon, as well as General Jim Jones, a former National Security Advisor.

He also attended a panel discussion organized by the Environmental Defense Fund and ExxonMobil on methane emissions. Dr Birol emphasized the need for the oil and gas industry to tackle methane emissions, something that can be done with current technology. Each year 76 million tonnes of methane leak to the atmosphere from oil and gas operations, and IEA analysis showed these could be cut by up to 50% at no net cost. Doing so would have the same climate benefit as shutting down two-thirds of Asia’s coal-fired power plants.

Among other activities, Dr Birol met with about 50 IEA alumni at a reception organized by Guy Caruso, an ex-Administrator of the US Energy Information Administrator and a former Director at the IEA. He was also the inaugural speaker at the Brooking Institution’s new speaker series on energy and climate, which was attended by more than 200 scholars, policy experts and journalists.