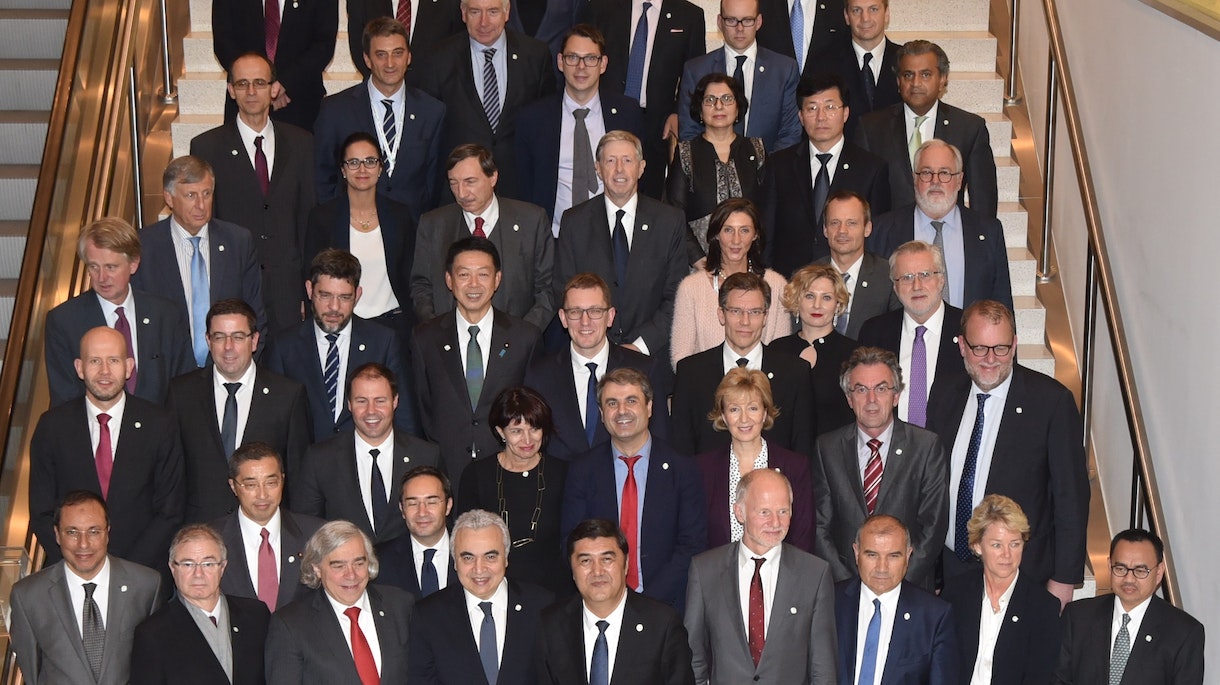 Ministers and high-level officials from all 29 IEA countries and nine partner countries joined with 30 top business executives to deliver a strong signal of unity and support for France as they met in Paris this week for the International Energy Agency’s 2015 Ministerial meeting.

"This week we joined together in solidarity from all corners of the globe following the terrorist attacks perpetrated in Paris," said Executive Director Fatih Birol as the meeting concluded on Wednesday. "We felt it was necessary to send a powerful message of support – to France and the world – especially in the lead-up to the very important climate negotiations that will begin here in less than two weeks." French Foreign Minister Laurent Fabius and French Minister of Ecology, Sustainable Development and Energy Segolene Royal were among the key speakers at the IEA Ministerial meeting, which also issued a statement calling for a successful outcome at COP21â€Œâ€Œ.

The Executive Director laid out three main pillars for modernising the IEA in a transformed global energy landscape, the first of which is to further open the doors of the IEA to emerging economies. On Monday, Mexico announced its decision to pursue IEA membership. On Wednesday, the IEA welcomed China’s and Indonesia’s decision to activate their status as Association countries.* Brazil, India and South Africa continue their active review of this initiative, while Thailand and Morocco declared their interest in joining the process. The IEA also renewed a number of bilateral work programmes with Brazil, Chile, China, Indonesia, Mexico and South Africa.

As the second pillar of his vision, the Executive Director proposed broadening the IEA’s core mandate of energy security – in part to take into account the continued evolution of global oil markets but also to factor in the rising role of liquefied natural gas (LNG) in the global energy trade.

The Executive Director’s third pillar involves transforming the Agency to become a global hub for clean energy technologies and energy efficiency. Ministers voiced support for strengthening the role of the IEA’s Technology Collaboration Programmes, an existing network of 6,000 energy technology experts worldwide. Chilean Minister of Energy Maximo Pacheco signed on to join one of these programmes – his country’s first – on advanced motor fuels. The IEA also agreed to co-operate with Indonesia on its new Centre of Excellence on Clean Energy and Energy Efficiency.

The two-day meeting was a unique opportunity for government ministers and industry leaders to discuss major energy-related issues, and the future of a world energy system transitioning in response to the threat of climate change. To discuss how these efforts will be realised in the context of an energy system that is increasingly defined by emerging economies, the 2015 IEA Ministerial meeting convened ministers and delegations from 29 IEA member countries and 9 partner countries – Brazil, Chile, China, India, Indonesia, Mexico, Morocco, South Africa and Thailand – together with the European Union. Around 30 executives from the IEA Energy Business Council (EBC) also took part.

To read the "Joint Ministerial Declaration on the occasion of the 2015 IEA Ministerial meeting expressing the Activation of Association", please click here.

* Later Wednesday, the IEA Governing Board also approved Thailand's activation of its status as an Association country.

Founded in 1974, the International Energy Agency was initially designed to help countries co-ordinate a collective response to major disruptions in the supply of oil. While this remains a key aspect of its work, the IEA has evolved and expanded. It is at the heart of global dialogue on energy, providing authoritative statistics and analysis. The IEA examines the full spectrum of energy issues and advocates policies that will enhance the reliability, affordability and sustainability of energy in its 29 member countries and beyond.