We live in a world dependent on chemicals. Fertilisers are used to increase agricultural yields. The cosmetics and pharmaceutical industries are reliant on the chemical sector for their key ingredients. And packaging – much of which is used for food and beverages – accounts for the largest share (36%) of global plastic demand, including synthetic textiles. At the current rate of production, Europe alone produces enough plastic packaging to encase the Eiffel Tower in plastic the thickness of a shopping bag every six seconds.

This demand for chemical products has a direct impact on energy demand (and consequently CO2 emissions). The sector accounts for approximately 11% and 8% respectively of the global primary demand for oil and natural gas.

More than half of the energy inputs to the sector are consumed as “feedstock”, or raw material. Feedstocks undergo a complex series of chemical transformations and ultimately leave the sector embedded in chemical products – for example the million or so plastic bottles consumed every minute around the globe.

The figure below lays out the path that fossil fuel feedstocks take through the chemical and petrochemical sector. A large proportion of oil gets converted into high value chemicals within the chemical sector, with refineries supplying around a third directly. The dominant feedstock for both ammonia and methanol is natural gas, although coal is also used in China. Collectively, these primary chemicals form the building blocks for thousands of intermediates, eventually ending up in fertilisers, plastics and other chemical products.

The total mass of chemical products leaving the sector is larger than the quantity of feedstock entering it. This is because in addition to feedstock (mainly composed of carbon and hydrogen), several chemical products contain other elements (mainly oxygen, nitrogen and chlorine) that are added and substituted at various points in the supply chain. 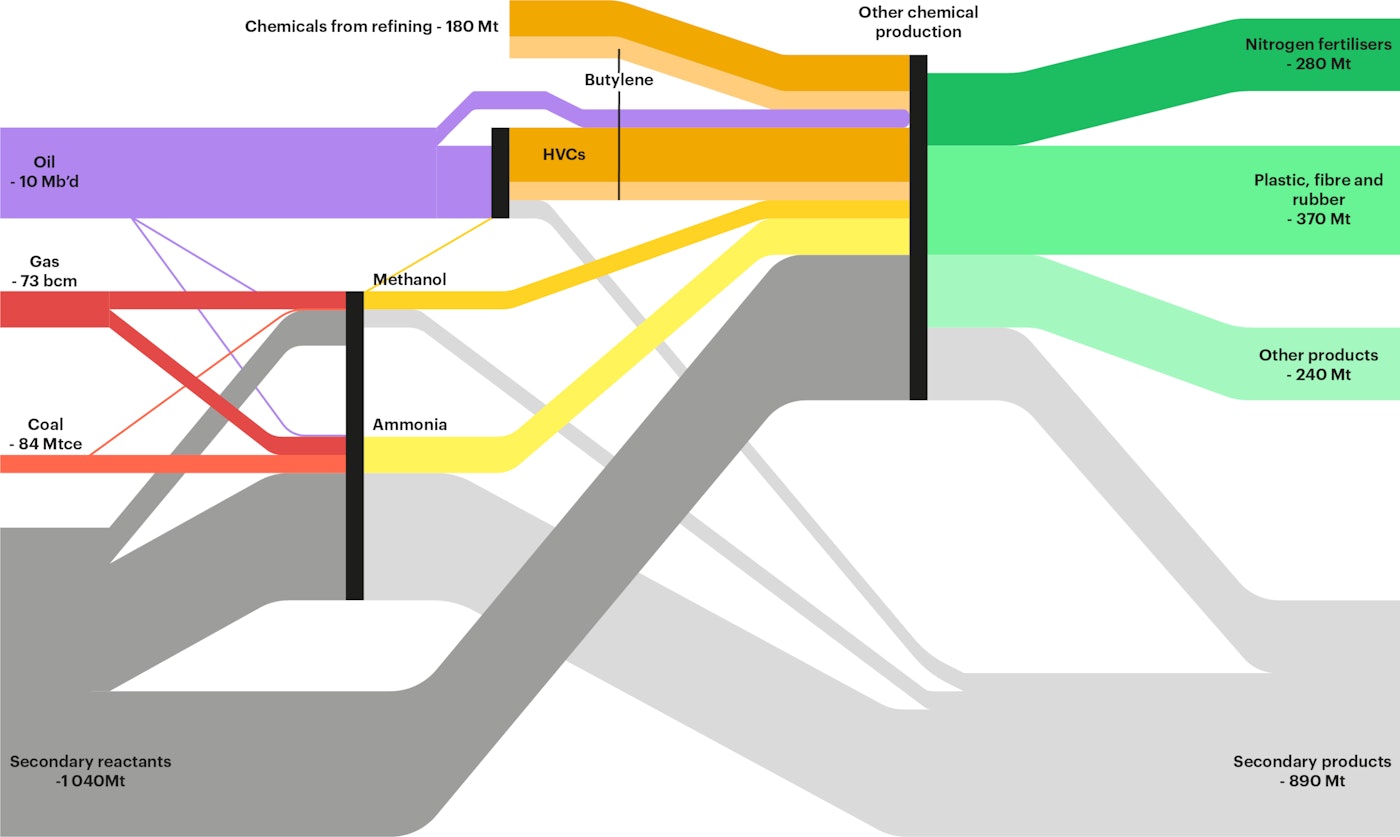 Partly as a result of this dependence on energy as feedstock, the chemical sector is the largest industrial energy consumer – but only the third largest source of industrial CO2 emissions after iron and steel and cement. In addition, further CO2 and other air pollutants can be released during the use of certain chemical products, such as fertilisers and cleaning products. Also, plastics and fertilisers can cause devastation to marine life when they leak into water courses, without effective management of waste and agricultural practices.

There are alternative pathways to producing chemicals, including recycling of thermoplastics and increased use of alternative feedstocks such as water, CO2 and bioenergy. These alternatives have the potential to reduce demand for primary chemicals made from fossil fuels, cutting both energy use and CO2 emissions. For example, for each tonne of polyethylene being recycled, roughly one tonne of ethylene demand can be avoided, saving the equivalent of at least 1.5 tonnes of oil.

Together with traditional routes equipped with carbon capture, the untapped potential of these alternative routes to decouple chemicals production from CO2 emissions is high. Global recycling of plastic was estimated to reach only 18% of all non-fibre plastic waste in 2014. Meanwhile, bioplastics only make up about 1% of the plastic produced around the world, each year, and electrolytic routes are still at the pilot project phase. Clearly there is much scope for progress. In theory, the chemical sector could do without fossil fuels entirely, though carbon and hydrogen in its feedstock will remain a necessity, whatever their origin.

Finding alternatives is key, because demand for fertilisers and plastics is set to grow as people live longer and enjoy better standards of living. The global transition towards a more sustainable future will rely on outputs from the chemical sector. For example, increasing the use of plastics in vehicles can support strategies to reduce their overall weight – ultimately reducing fuel consumption. Modern insulation materials that reduce the demand for heating and cooling in buildings also rely on products from the chemical sector.

Given the strong link between chemicals and fossil fuels and the potential for sustainable alternatives, what does the future hold for chemicals? Which technologies, strategies and policies could enable the sector to develop sustainably? What will be the consequent impacts on energy demand? The future of the chemical sector – as for the energy system as a whole – is uncertain. At the same time, a future without chemical products seems unlikely.

These questions and challenges will be examined in a forthcoming publication – “The Future of Petrochemicals.” This is the third report from the IEA that focuses on “blind spots” of the global energy system, following the “The Future of Trucks,” which was released in July 2017, and more recently “The Future of Cooling.”

The Future of Petrochemicals