Spain’s natural gas consumption peaked in 2008 at 40.3 7 billion cubic metres (bcm), and then gradually declined to 26 bcm in 2014 before recovering slightly. While Spain has almost no gas production, its supply is diversified, with Algeria being the largest supplier. Under its National Energy and Climate Plan, Spain anticipates demand for natural gas to be flat until 2030. Natural gas accounts for almost one-third of electricity generation. There remains some uncertainty around gas’ future role as a baseload capacity in an electricity mix based on variable renewables. The government plans to significantly expand renewable gases, based on a biogas roadmap under development.

Spain’s natural gas supply has a very high level of security, even in a crisis situation. The country's multiple supply routes, six large LNG terminals and an extensive gas network, guarantee supply in almost any situation. Minimum stocks of gas are at 20 days of consumption, which must be held by the shippers. Strong institutions, led by the Ministry, and clear regulations for the security of the natural gas market (based on domestic law and EU regulations), result in hardly any deficiencies in terms of securing gas supplies to the market, regardless of the circumstances. However, the changing role of the natural gas in the energy system of Spain may require adjustments to emergency planning and responsible institutions, particularly given the current energy security crisis in Europe.

The Ministry for the Ecological Transition and the Demographic Challenge (MTE) is the main energy policy body within the Spanish government. For the gas sector, its responsibilities include overseeing shipper registration as well as authorising infrastructure, including high-pressure grids, LNG terminals and subterranean storage. It also enforces safety regulations, ensures security of supply (including strategic reserves obligations and supply diversification requirements), ensures gas quality, promotion of renewable gases (biogas, bio-methane and hydrogen), and oversees revenues and third-party access tariffs for underground storage.

The Spanish gas transport grid reached a total length of 13 361 km of pipelines in 2019, with seven LNG terminals (six operating) and four underground storage facilities, providing natural gas to 1 805 municipalities), and over 7.9 million supply points. The gas pipeline network has 19 compressor stations, 45 transmission centres, and 416 measurement and regulation stations. Notably, the circular structure of the gas grid allows nearly every region of the country to be supplied from two directions, which makes Spain unique in comparison to its neighbours. All this allows smooth distribution of gas throughout the national territory, ensuring security of natural gas supply even in peak demand situations. Infrastructures have been able to cover the high annual demand of 36.1 bcm in 2019 without restrictions. This demand was well below the historical maximum demand of above 40 bcm in 2008, when infrastructure was less developed.

There have been two main interconnection projects planned for several years: STEP with France (first phase of MidCat project) and the Third Interconnection with Portugal (dependent of the STEP project construction). STEP was also designated as an EU Project of Common Interest (PCI) in 2013, 2015 and 2017. Nevertheless, after the TSOs of France and Spain issued the Investment Request in July 2018, the national regulatory authorities in both countries rejected the investment request in January 2019. No gas projects among Spain, Portugal and France were included in the 4th List of PCIs approved by European Commission.

Spain maintains Europe’s largest fleet of LNG terminals, with seven facilities – six in operation. The Spanish gas system has a total of 25 fuel tanks storages, 8 berths and capacity to receive LNG vessels of up to 270 000 cubic metres (m3). In 2019 gas receipts from LNG terminals to the transmission grid rebounded almost 57% from 2018. However, the utilisation rate of Spain’s LNG regasification capacity is relatively low, at only 21% on average between 2012 and 2018 and 36% in 2019.

Spain has four underground storages in operation: Gaviota (offshore), Serrablo, Yela, and Marismas. Enagas manages the first three storages, while Naturgy Almacenamientos Andalucia manages the Marismas gas storage. The capacity in the four storage facilities for the period from 1 April 2019 to 31 March 31 2020 was set at around 3 bcm.

The regasification plant in Barcelona, with a release capacity, regasification and cistern load of 48.1 mcm/d, has the greatest capacity of any of Spain’s gas facilities. Based on the demand forecast for the next four winters, the N-1 formula for the Spanish gas infrastructure amounted to 123%.

In addition, the EU Regulation created risk groups, based on the main gas supply sources and routes, to strengthen regional cooperation and make it possible to conclude agreements on appropriate and effective cross-border measures to ensure supply. Spain coordinated the Algeria Risk Assessment and participated in the Norway Risk Assessment. The greatest potential risk identified for Spain is the total failure of the main supplier (Algeria), who accounted for 39% of the total gas market in 2019. It should be pointed out that this failure has never occurred.

LNG also plays an important role in bolstering Spain’s gas security as it provides a high degree of flexibility and source diversification. Moreover, Spain’s geographic location, with access to both the Atlantic and Mediterranean basins, increases the scope of available LNG sources, allowing gas suppliers to import gas from virtually any LNG producing country. Moreover, LNG also drives competition, enabling newcomers to access the wholesale market and introduce gas in the Spanish network via spot sales. 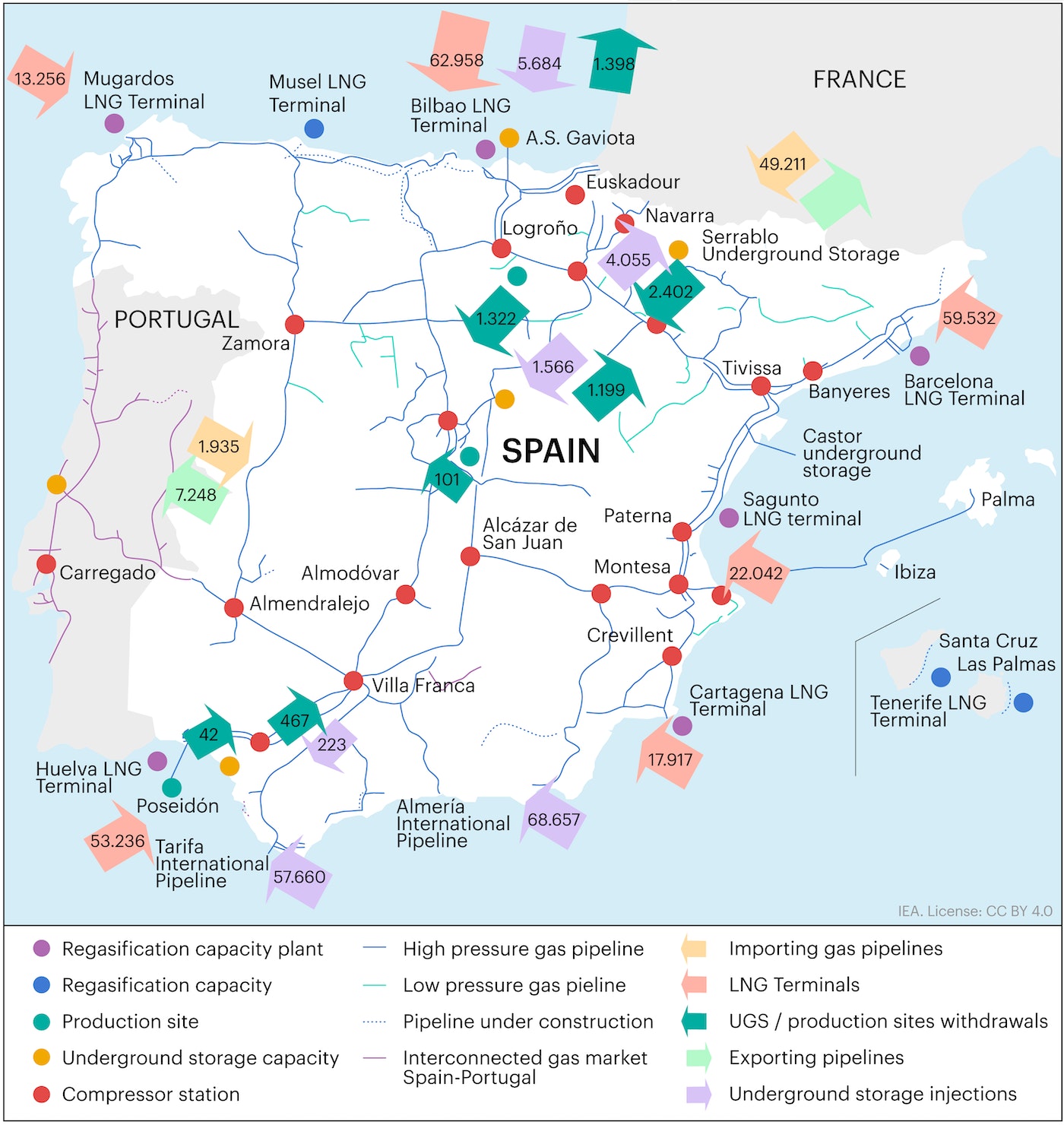 Overall responsibility for security of gas supply is divided between the Ministry of Ecological Transition and Demographic Challenge, the main transmission system operator (Enagas) and the Competition Authority. The central stockholding entity, Corporación De Reservas Estrategicas De Productos Petrolíferos (CORES), is responsible for controlling the minimum stockholding obligations as well as for verifying operators’ obligations to diversify their natural gas supplies.

The Spanish natural gas system operates under the System Technical Management Rules, a procedure to cope with exceptional situations that may affect the operation of the system. The system operator (Enagas), is responsible for putting this procedure into practice, declaring the level of emergency and coordinating the actions of system users.

The gas security framework in Spain is based on national and European legislation. At the national level, the Hydrocarbon Act and Royal Decree 1714/2004 established the basis for natural gas security of supply.

When one country accounts for more than 50% of national consumption, shippers or self-consumers that have a share of imports higher than 7% must diversify their portfolios to get gas supplies from that origin country below 50%.

At the European level, EU Gas Security of Supply Regulation 2017/1938 establishes provisions to safeguard the security of gas supply in the European Union by ensuring the proper and continuous functioning of the internal market in natural gas. It allows for exceptional measures to be implemented when the market can no longer meet gas demand, including solidarity measures of last resort with neighbouring countries.

It also provides a clear definition and attribution of responsibilities among natural gas undertakings, member states and the European Union, regarding both preventive action and reaction to concrete disruptions of gas supply. Spain has submitted to the European Commission National Risk Assessment, the Preventive Action Plan and the Emergency Plan for the period of 2019-2023.

While annual gas consumption is not expected to change much, electricity security in Spain will rely on gas emergency stocks and a flexible gas system, especially gas-fired combined cycle power plants, as they can balance the variability of future renewable electricity production. This would be supported by demand response and interconnections to neighbouring countries. Therefore, the security of supply of the gas system and the electricity system are closely interlinked, and will become more so in coming years.

Shippers and self-supplied consumers must at all times maintain natural gas stocks equal to 20 days of firm sales or consumption during the preceding calendar year (firm sales are supplies that cannot be interrupted, for either commercial or technical reasons). The stocks must be kept in underground storage. The government assumes control of the strategic stocks in emergency situations.

As an additional measure, the Spanish administration enforces a Winter Action Plan, which lays out additional requirements for shippers from 1 November to 31 March in accordance with the Gas System Technical Management Rules. The Winter Action Plan is approved on a yearly basis by the Directorate General for Energy Policy and Mining at the MTE and includes additional minimum stocks levels (3.5 days of contracted LNG capacity over 1 November-31 March), a method to cover the increase of demand in case of a cold spell.