Spain’s demand for electricity is increasing across all sectors as a result of its electrification strategy, and industry, residential and services sectors respectively consume similar amounts of electricity. In the last decade, electricity generation in Spain has notably decarbonised, as the share of production from fossil fuels decreased. Renewable energy is the leading provider of electricity, followed by natural gas, nuclear, coal and oil. Spain is now halfway to reaching the National Energy and Climate Plan’s objective of having 74% of renewables electricity generation in 2030, which will require further efforts from all market players.

The completed phase-out of coal, the process of phasing out nuclear and the further rapid development of variable renewables, pose new sets of challenges for electricity security. The challenges are twofold - on the infrastructure side it is about ensuring sufficient system adequacy, be it through domestic capacities or interconnections. On the policies and operability side, it is about building and managing an electricity market that meets with political ambitions and environmental requirements, while assuring uninterrupted supplies. A new and increasingly important challenge lays with securing critical minerals indispensable to deploying adequate capacities of renewable generation.

Spain’s electricity market is dominated by three main generators: Grupo Endesa, Iberdrola and Gas Natural Fenosa. Combined, they account for an estimated 50% of the Spanish electricity market by consumption volume. Their market concentration has fallen in recent years as electricity is increasingly generated by renewable energy sources, whose ownership is relatively fragmented.

Distribution companies are responsible for operating, maintaining and developing the distribution network. They are also the owners of the distribution networks. In Spain, there are 333 distribution companies, though five of them are dominant. These five companies, each with more than 100 000 consumers connected to their grids, are part of the main electricity companies in the country and carry out their activities in compliance with the unbundling requirements that are established in the electricity sector regulatory framework and in European law. The other companies are small ones, linked to the historical development of the local networks. As of 30 September 2019, the five traditional suppliers supplied 84.9% of total supply points in the free market (three years before they supplied 90.4%).

There is no centralised planning process for the distribution grid, although the government imposes a spending cap on distribution network plans, which are defined over periods of three years.

Interconnection capacity between Spain and Morocco is 900 MW in the Spain-Morocco direction and 600 MW in the Morocco-Spain direction by means of two DC submarine electrical cables. Spain’s interconnection capacity with Continental Europe, relative to its installed power capacity, is still below the European Union (‘EU’, hereafter) objective of 10% by 2020 and 15% by 2030. Spain, Portugal, France and the European Council continue to collaborate on the issue, which is necessary for the Iberian Peninsula to cease being an energy island and create a truly pan-European electricity market according to the EU legislative package published in June 2019.

Spain’s interconnection capacity with the rest of Continental Europe, relative to its installed power capacity, is still below the EU objective of 10% by 2020 and 15% by 2030. As such, Spain, Portugal, France and the European Council continue to collaborate on the issue. This is necessary to transition the Iberian Peninsula away from being an energy island and to create a true European electricity market according to the EU legislative package published in June 2019

The role of Red Eléctrica de España (REE), the Transmission System Operator (TSO), is to ensure balancing of the Spanish electricity system. To this end, it forecasts electricity demand, oversees the operation of the generation facilities and manages the transmission facilities in real-time, constantly ensuring that scheduled generation in power stations matches consumer demand. Should a difference arise between the two, REE sends instructions to the power stations to increase or reduce their electricity production in such a way that it ensures the safety margins necessary to face possible unexpected losses in generation or unscheduled changes in consumption. REE prepares the annual medium and long-term power forecasts for demand evolution and generation adequacy. These forecasts are essential in order to draw up the transmission grid development plans for the upcoming years, which are approved by the Ministry.

In recent years, Spain has made headway in improving its system flexibility to integrate more variable renewables, including: allowing renewable energy and co-generation facilities to participate in balancing services; technical and regulatory work at the national and European level for the development of pan-European imbalance netting services (REE began participation in the Integrated Gasification Combined Cycle [IGCC] imbalance netting platform in September 2020), and regulation to allow demand-side response to participate in balancing markets.

Looking ahead, Spain’s ambitious target to source 74% of electricity generation from renewables by 2030 will require additional measures to ensure the smooth system integration of variable renewables, notably solar and wind. To this end, Spain’s National Energy and Climate Plan includes several measures to facilitate their integration, including measures on demand management, storage and flexibility, and on the adaptation of electrical networks for the integration of renewables.

The Spanish government announced its support for the development of technology for energy storage for renewables, to increase the system's flexibility and the stability of the network. The Strategy envisages having a storage capacity of about 20 GW by 2030 and reaching 30 GW by 2050, considering both large-scale and distributed storage. The document identifies and analyses challenges, defines measures for their effective deployment, assesses opportunities and quantifies storage needs to contribute to the decarbonisation of the energy system.

Storage deployment in Spain will add to provide opportunities for job creation, fair transition, economic recovery, and the creation of new business models across the value chain. These technologies are in place in sectors such as electric mobility, building or industry, and promote the development of new business models such as independent aggregators or renewable energy communities, which drive the active role of consumers. 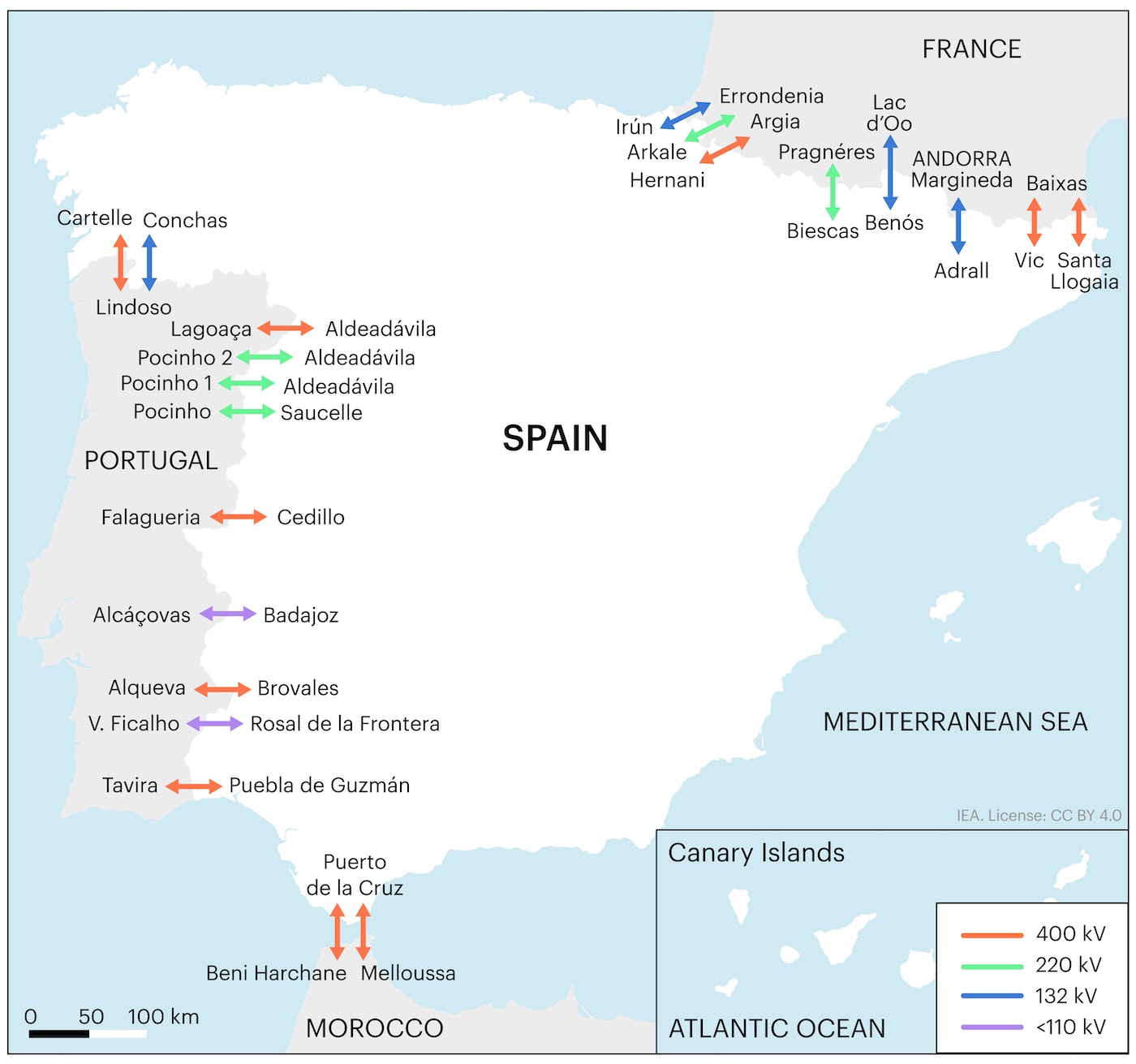 The legislative framework for electricity security at the national level consists of the Electricity Industry Law 24/2013, EU Regulation 2019/941 on risk preparedness in the electricity sector and Spain’s Law 8/2011, which establishes measures for the protection of critical infrastructure in Spain. In practice, the TSO (REE) has the primary operational responsibility for electricity emergency response in Spain.

The Spanish government has taken into account the growing risks provoked by greater extreme weather events on electric infrastructure as well as the strain on water resources in Spain, which could limit electricity generation from hydropower or increased fires in dry regions. As such, the government has developed several reports to address and prepare for increasing dangers related to climate change, such as the National Climate Change Adaptation Plan (2021-2030) and its Work Programmes, which outlines various scenarios to understand the strain on electricity supply, and lines of action to prevent and monitor these events. The concerns raised by climate change on the energy sector was also underlined in Spain’s National Energy and Climate Plan (2021-2030), submitted to the EU Commission late 2020.

The National Plan for Adaptation to Climate Change largely aims to:

According to article 7 of the Electricity Industry Law, the government may adopt, for a specific period, the necessary measures to guarantee the supply of electricity when any of the following situations arise:

To guarantee security of electricity under these circumstances, the government may implement the following measures:

Currently, based on the identified regional and national crisis scenarios, the Directorate General for Energy Policy and Mines, in close collaboration with REE and the main actors of the national electricity system, is preparing a risk preparedness plan, which shall include all necessary measures to prevent, prepare for or mitigate power crises. This plan will also include bilateral measures with France and Portugal if necessary, in order to ensure a consistent response and reduce the risk of negative spill-over effects.

The Spanish TSO employs several measures, processes and tools in its resilience strategy to face potential disruptions, including:

Cybersecurity is one of the main risks that TSO identifies as threatening the Spanish electricity system, and is part of the REE operational risk. In this regard, TSO has established a number of structures within the company's management system to take care of cybersecurity on a permanent basis.

In March 2022. Tarlogic (a Spanish cybersecurity company) have revealed that, with the help of a device, it is possible to hack electricity smart meters and even leave entire neighbourhoods without power relatively easily. This problem is not specific to Spain and the widespread adoption of smart metering raises questions about the security of electricity system management, also at the consumer level.