Oil remains the most significant energy source in Japan, accounting for about 40% of the country’s total energy supply, even if Japan’s oil demand has been steadily decreasing in line with the country’s overall declining total energy use. This decline was only briefly interrupted after the 2011 Great East Japan Earthquake and its subsequent impacts, when old oil power generation facilities were quickly brought back online to replace temporarily missing nuclear generation.

Having no notable domestic production, Japan is heavily dependent on crude oil imports, with between 80% to 90% coming from the Middle East region. In terms of refined products, domestic refineries are capable of meeting demand for transport fuels, but LPG and naphtha need to be imported.

Japan’s emergency oil stockholding system mainly consists of government-owned stocks, with a smaller stockholding obligation on industry. The primary role of the Japan Oil, Gas and Metals National Corporation (JOGMEC) is to manage 90 days (based on the net imports) of public stocks under the Oil Stockpiling Act, while industry (refineries, specified distributors and importers) is obliged to hold the equivalent of 70 days of stocks, based on consumption over the previous 12 months. The public stocks mostly consist of crude oil, but the government has expanded its emergency inventory to include around six days of four categories of refined products – gasoline, kerosene, fuel oil and diesel oil. Some government stocks are held in storage facilities with no drawdown infrastructure and would take weeks or months to release, some in dedicated leased tanks, and some (namely the product stocks) are commingled with industry stocks. In case of an IEA coordinated collective action, Japan would likely rely in the first instance on a release of industry stocks. The Japanese administration cooperates heavily with the industry also in preparing emergency measures – the Petroleum Association of Japan is responsible for coordinating and testing the Emergency Oil Supply Cooperation Plan.

There is only one oil pipeline in the country, which transports jet fuels from the Chiba refinery to Narita International Airport. Oil products are delivered from refineries to consumers mostly by coastal tankers, tank trucks, and railroad tankers.

Japan’s major refineries date back to the 1960s and 1970s. To increase competitiveness in the face of changing demand patterns and increasing competition from emerging countries, there has been some consolidation and optimisation. There have already been two rounds of regulation aimed at more effective use of crude oil, urging refiners to further integrate with petrochemical industry and align with overseas markets. The latest round of regulation came into force in 2020, which aimed to respond to the 2020 International Maritime Organisation sulphur reduction regulations.

Japan has 22 refineries located throughout the country, with a total processing capacity of 3.5 mb/d of atmospheric distillation capacity. Three major companies own the majority – 17 refineries, with ENEOS being the most significant with a total capacity of 1.4 mb/d at its nine refineries and a 50% sales market share. The other three are Idemitsu Kosan Co., Cosmo Oil Co. and Taiyo Co. Refineries are mostly located close to demand centres, and eight refineries are located in the Kanto Region in order to supply oil products in the Tokyo area.

The refineries are able to meet demand for all key transport fuels – gasolines, jet fuel and diesel. But they are not able to meet domestic demand for LPG, ethane, naphtha and residual fuels.

Total storage capacity in Japan is estimated at over 850 mb. Of this, there are ten bases for government stocks with a total capacity of 252 mb and private companies have a capacity of over 600 mb. 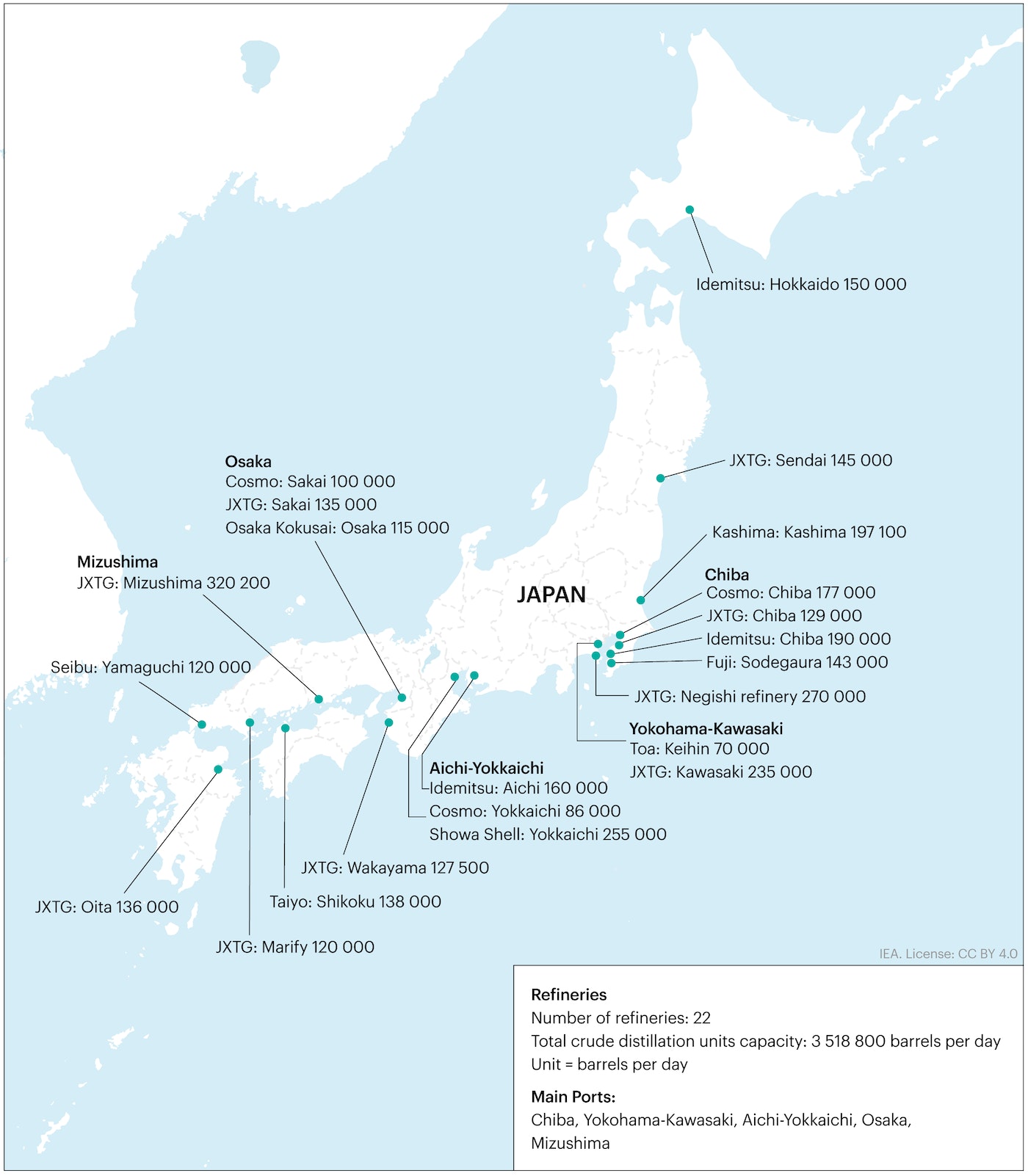 The Petroleum Refining and Reserve Division of the Natural Resources and Fuel Department acts as a secretariat and forms the core of the Japanese National Emergency Strategy Organisation (NESO), in cooperation with other relevant ministries and industry.

The Oil Stockpiling Act allows the Minister of the Economy, Trade and Industry to make a decision to release government stocks and/or lower the industry obligation. According to a decision by the minister, the Petroleum Refining and Reserve Division coordinates government stock releases with JOGMEC, which is responsible for managing the stocks. When lowering the industry obligation, the Division cooperates closely with the Petroleum Association of Japan.

In a crisis, the administration would determine which stocks should be released, based on the nature and expected duration of the crisis and the needs of the markets. To date, all emergency releases, including the IEA coordinated actions, have been done with obligated industry stocks. The government stocks are regarded as “last resort” in the policy. They function as backing up the private stocks to keep supplying oil to domestic refineries in case of emergency.

The government implemented changes following the regional shortages of oil products caused by the 2011 earthquake. One of the improvements was to oblige oil companies to jointly prepare Emergency Oil Supply Cooperation Plans in order to ensure cooperation among companies in supplying oil products to end users in the event of a disaster. This was used following the Kumamoto earthquake in April 2016, to collect and share disaster information, deal with emergency supply requests and quickly restore the supply chain. The Petroleum Association of Japan coordinates the work on these Plans, ensures sharing of best practice among companies and prepares exercises.

Another initiative to ensure the availability of crude oil supplies during an emergency was to establish agreements with major oil producing countries, allowing them to use Japanese crude storage tanks for their own commercial activities in the Asian market. Under these agreements, the Japanese government covers the rent costs for the storage facilities in exchange for prioritising the supply of crude to Japanese companies in an emergency. The first agreements of this kind were concluded in the 2000s between Japan and two of the country’s top two oil suppliers, Saudi Aramco of Saudi Arabia and the Abu Dhabi Supreme Petroleum Council (ADNOC) of the United Arab Emirates; the contracts are renewed every few years. The total maximum capacity for these arrangements is 16.4 mb. A third such agreement was reached in December 2020 with the Kuwait Petroleum Corporation (KPC), under which Japan and Kuwait will embark on joint oil storage at a level of approximately 3.14 mb (500 000 kl).

The administration has a programme of identifying strategic filling stations that would be used around the country for emergency supply in a disruption. This list is regularly updated in cooperation with the industry and there is a subsidy for the identified stations to set up emergency back-up power.

Industry stocks would always be released in the first stage; the joint stockpiling programme stocks and government stocks would be used only in more severe disruptions.

Due to Japan’s geographical distance, the administration expects that following a disruption in the Middle East, tankers would keep arriving for about three weeks, providing time to organise voluntary demand restraint campaigns and industry stocks release.

Japan is consistently compliant with the IEA’s minimum obligation. This obligation is met by holding government stocks and imposing an obligation on industry.

The Stockpiling Act requires METI to set 5-year targets for oil stocks; 90 days of imports for government stocks and 70 days of domestic consumption for industry stocks. According to the Act, refineries, specified distributors and importers are obliged to hold from 70 to 90 days of their average daily imports, sales or refined production in the previous 12 months.

Japan does not hold any stocks abroad. There is a bilateral agreement with New Zealand, allowing New Zealand to purchase stock tickets in Japan, but there are no stocks held under this agreement as of 2021.

The obligated industry stakeholders must notify METI twice a month of the volume of stocks they hold. METI has the power to conduct on-site inspections when necessary, and can recommend or order companies that fail to keep their stocks at or above the required level. Penalties for non-compliance can reach millions of JPY or imprisonment.

The Oil Stockpiling Act requires a decision by METI to draw down public stocks in global supply disruptions or local disruptions because of natural disaster. Upon receiving the stock release order from the minister, METI opens a public tendering process. After completion of the tendering process, JOGMEC would be instructed to supply public stocks to the successful bidders. It is estimated that it would take around 10 to 15 days to draw down public stocks after receipt of the instruction from the government. The Act also allows the government to loan public stocks to the market. However, this has never been implemented and there has never been a test sale of the public stocks.

A decision from the minister is required to lower the industry compulsory stockholding obligation. Decisions on how the compulsory stocks should practically be released are made by the stockholder in close cooperation with the Petroleum Association of Japan.

Due to sufficient levels of emergency oil stocks, Japan would only deploy demand restraint measures in the event of a severe oil supply crisis.

Japan’s demand restraint measures would range from light-handed measures (e.g. accurate information sharing and energy saving campaigns) to heavy-handed measures (e.g. limitations in oil use in specific industrial sectors, oil products limitation for end-users and allocation of oil). The latter measures would be taken under the Petroleum Supply and Demand Optimisation Act, which allows the Prime Minister to announce demand restraint measures based on a cabinet decision.

METI would monitor measures through regular reports from the oil industry.

Data for OECD countries up to June 2020