The share of natural gas in Japan’s total energy supply increased significantly over the past decade, driven by growing demand from the electricity generation sector. The 2011 Great East Japan Earthquake and subsequent Fukushima nuclear accident resulted in the closure of all nuclear plans, which led to an increase in the demand for natural gas. While Japan produces more gas than oil, domestic production is still very limited, bringing the dependence on imports to over 90%.

With its archipelago geography, Japan’s imports are entirely in the form of liquefied natural gas, through 37 dedicated LNG import terminals. Japan’s natural gas supply is well diversified. In 2019, Australia was the largest supplier, representing less than half of total imports. There is no obligation for the industry to hold emergency gas stocks nor to report stock levels, which might hamper situational awareness in a disruption.

Japan’s long-term gas security policy relies on diversifying its long-term supply contracts and on ensuring these contracts include enough flexibility to increase imports during an emergency. The country is very active both in the region and globally, and successfully initiated the “LNG Producer-Consumer Conference”, held every year since 2012 to facilitate dialogue among key stakeholders.

Note: The transport sector’s consumption in natural gas is not visible on this scale (less than 0.1 bcm).

Gas networks in Japan are quite fragmented due to their historical development around individual city gas areas. Japan’s mountainous terrain also makes it difficult to connect these fragmented networks. The country’s total gas pipeline network runs 261 167 km. Around 86% are low-pressure grids for local distribution, while only 0.9% are for high pressure. Although there are some interconnection points between areas, the trunk line networks are not necessarily connected to each other as they have separately developed around LNG terminals. As a result, there is also no single national TSO.

Pipelines are mostly owned and operated by electricity utilities and city gas companies. Third-party access (TPA) to trunk pipelines and distribution networks was introduced in 2004 and is to be individually negotiated by parties proposing to supply customers, although the lack of interconnections between regions limits competition.

The administration is trying to promote more interconnections via the revised 2015 Gas Business Act, which allows the government to order business operators to consult among themselves and to arbitrate between them on pipeline development. In addition, the gas pipeline development policy was finalised in June 2016. It establishes clear rules on how decisions on interconnections are to be taken and how these projects would be financed, in order to accelerate the realisation of interconnection projects.

The majority of LNG terminals are owned and operated by electricity utilities and city gas companies. Some are joint ventures (including with the participation of regional governments) or are owned by other big industries such as a steel company. Electricity companies own close to half of the total LNG storage capacity, followed by gas utilities. There is no obligation for the industry to report actual stock levels. 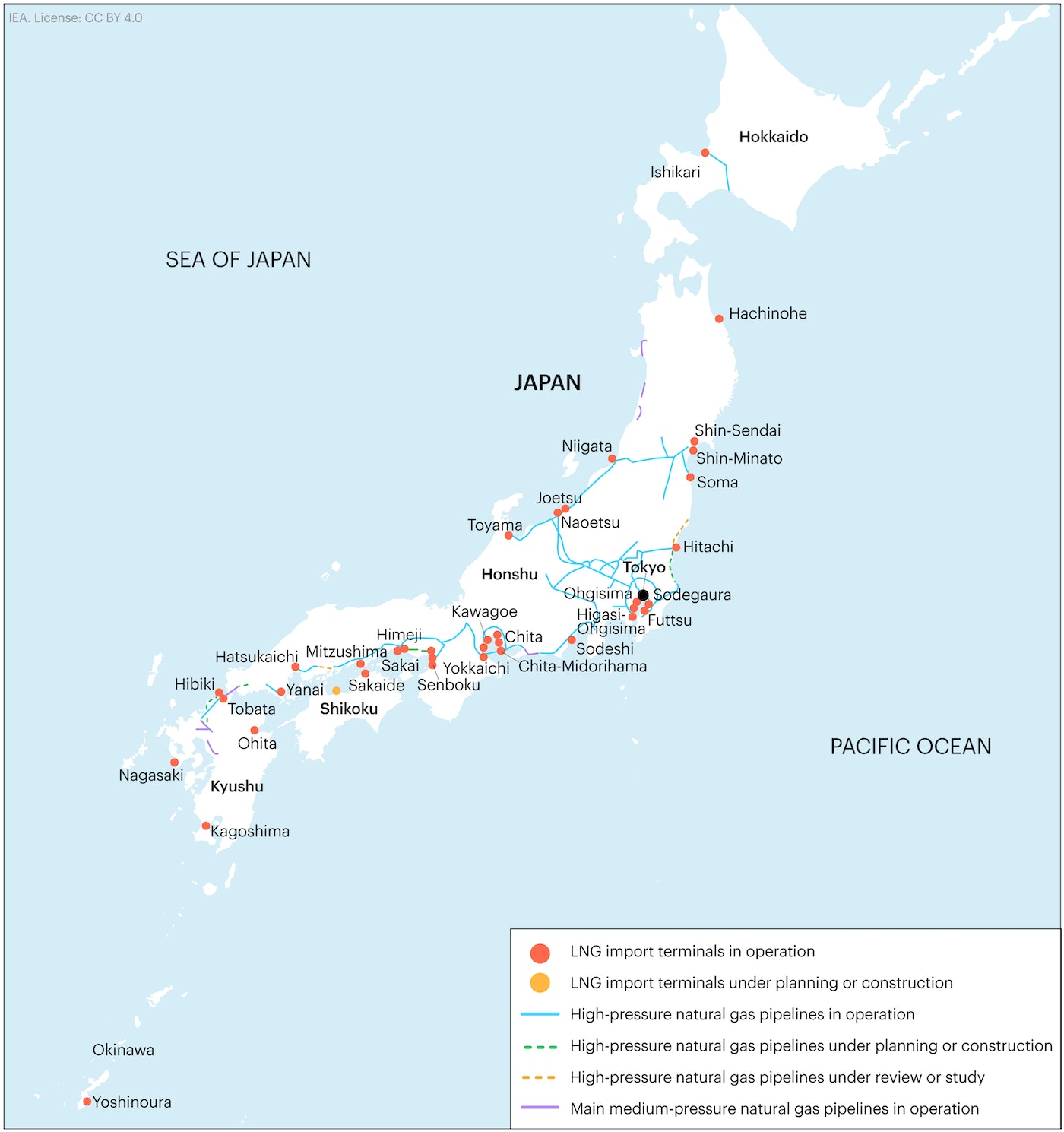 The key elements of Japan’s overall gas security policy are to diversify its long-term supply contract portfolio, maintain good relationships with both producers and other consumers in the region, ensure flexibility to increase imports during emergency situations, and use voluntary commercial LNG stocks. Each gas company is expected to ensure gas supply within its distribution area.

The 1954 Gas Business Act obliges gas utilities to compile and submit gas supply plans to the government every fiscal year. The plans cover gas supply and demand in each business year and are evaluated by the government.

The Japan Gas Association established a guideline for large-scale natural gas supply disruptions, including a framework for emergency management organisation by the city gas industry. Also based on a recommendation from this assessment, the administration intends to conduct regular natural gas disruption exercises on a national level.

Although there is no legal obligation, electric power companies and city gas companies normally hold a certain amount of commercial stock to meet around two weeks of natural gas demand, the volume of which depends on whether the situation is stable or if demand in natural gas is exceptionally high.

In order to strengthen resistance to disasters such as earthquakes and typhoons, the Japanese gas industry has replaced ageing low-pressure gas pipes with polyethylene pipes and high seismic resistant pipes. To prevent secondary disasters, there are block formations and automatic remote devices to shut down the system.

The country has not established a National Emergency Strategy Organization (NESO) structure for natural gas supply disruptions. However, the Ministry of Economy Trade and Industry (METI) divisions in charge of natural gas emergency response at the Agency for Natural Resources and Energy (ANRE) – including the Gas Market Division – are supposed to take leading roles in coordinating the necessary actions and liaising with industry.

In the case of an interruption of city gas supply caused by earthquake or flood, METI and the city gas industry have established a system to share information and cooperate to get service running again. A similar system also exists for the electricity companies.

Natural gas is the most important source for electricity generation. The importance of natural gas for Japan’s electricity production has gradually been growing, especially increased after the 2011 earthquake near Fukushima, which led to the closure of all nuclear power plants.

Although there is no legal obligation, electric power companies and city gas companies normally hold a certain amount of commercial stocks to meet around two to three weeks of natural gas demand in normal times.

In order to strengthen resistance to disasters such as earthquakes and typhoons, the Japanese gas industry has replaced aging low-pressure gas pipes with polyethylene pipes and high seismic resistant pipes. To prevent secondary disasters, there are block formations and automatic remote devices to shut down the gas system.