Oil consumption declined considerably from 2007-2014, but then remained relatively stable from 2015-2019. It rebounded strongly in 2021 to pre-pandemic levels after falling sharply in 2020. In the short-term, there is little to suggest that oil demand will decline significantly. However, in the medium to long-term, the government expects a major reduction in oil demand, largely as a result of greater use of electric vehicles and alternative fuels in the transportation sector. Italy has a large refining industry and is a significant net exporter of oil products. However, there has been substantial rationalisation of refining capacity since the late 2000s and further rationalisation is very likely. Italy is a significant net importer of crude oil.

Stock releases are the principal means by which Italy would participate in an IEA collective action or respond to a serious localised supply disruption. Italy has a sound oil stockholding regime with both a public stockholding agency and an industry stockholding obligation. However, the government would decide to respond to a supply disruption with either the use of industry stocks, stocks held by the public stockholding agency, or with a mix of both; as part of the IEA collective actions in March and April 2022, Italy lowered the obligation on industry in both cases. Since its formation in 2014, the public stockholding agency, Organismo Centrale di Stoccaggio Italiano (OCSIT), has been working towards a goal of building up its stockholding level to 30 days of net imports of ‘specific stocks’ by 2024; however, OCSIT paused its stockbuild in 2022 due to market tightness. Thanks to stockholding obligations for industry, Italy has been consistently compliant with its IEA stockholding obligation and has been highly reactive in moving to support the stability of global oil markets in recent months with the release of oil stocks as part of two IEA collective actions. In addition to a stock release, a range of demand restraint measures can be implemented to save oil, together with a limited amount of fuel switching.

There has been significant rationalisation of refining capacity in Italy over the past decade with the closure of four refineries; the Gela refinery in Sicily was transformed into a biofuels processing facility while three other shuttered refineries were converted into storage facilities. Eni is considering converting other traditional refineries into biorefineries. Additional rationalisation of refining capacity is highly likely in the future given long-term projections of declining demand for oil products in the European Mediterranean, and increased competition to supply European product markets from new, large-scale refineries in the Middle East and Asia.

There are approximately 405 oil storage terminals across Italy, with total storage capacity of around 26 million cubic metres (mcm) or 163 million barrels. Storage capacity is roughly 25% crude oil and 75% refined products. There are no plans for significant additions to Italy’s oil storage capacity, although this may change if there is additional refining capacity rationalisation. 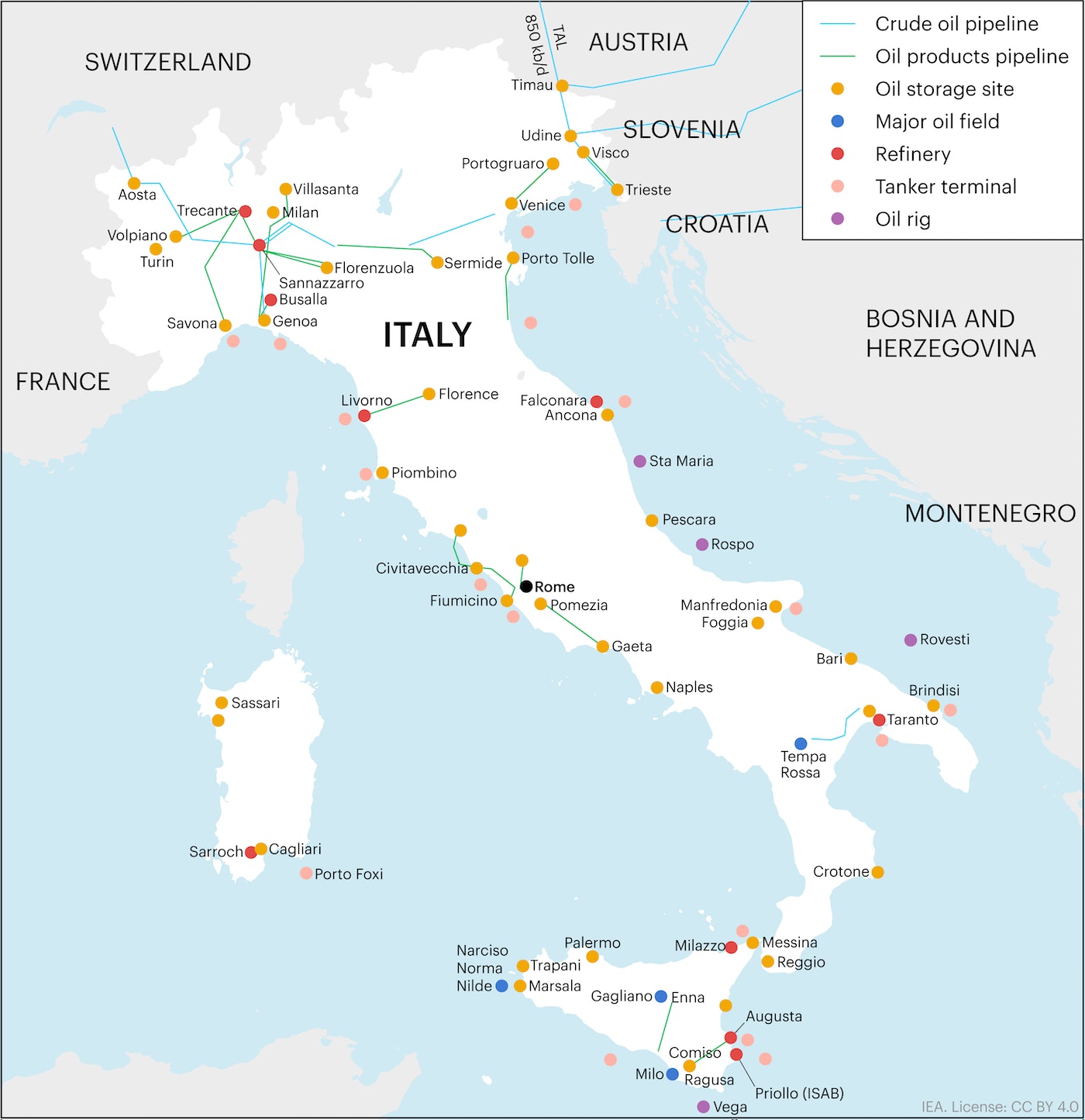 The Ministry for Ecological Transition (MiTE) has overall responsibility for oil emergency policy in Italy. Within the MiTE, the Office for Oil Security functions as Italy’s National Emergency Sharing Organisation (NESO) outside of emergency situations (a separate body would be convened to respond to a supply disruption). The Office for Oil Security is situated in the Energy Department of the MiTE, under the General Directorate for Infrastructure and Safety of Energy and Geomineral Systems.

The Office for Oil Security’s role is to monitor oil market developments, collect data related to oil supply, demand and stocks, monitor compliance with Italy’s stockholding requirements, and liaise with industry, the IEA Secretariat and the European Commission on matters relating to oil markets and the security of oil supply. It is also charged with holding emergency training exercises related to oil supply disruptions, but no such exercises have been held in recent years and there are no concrete plans to do so in the near future.

A decision to release emergency stocks would be announced in a ministerial decree. The stockholding agency, OCSIT, and all companies holding emergency stocks, can be obligated to make a prescribed level of stocks available to the market. All companies concerned would be informed of their obligated contribution on an individual basis. The final decision on implementing measures other than a stock release would also be taken by the MiTE, following a recommendation from the Conference of Services.

An emergency oil handbook, the Handbook for the Management of Energy Emergencies, outlines the measures that can be taken in the event of an oil supply disruption, as well as the broad roles and responsibilities of various stakeholders. The stockholding agency, OCSIT, is responsible for maintaining the handbook, which was last updated in February 2022.

A stock release is the principal means by which Italy would participate in an IEA collective action or respond to a serious localised supply disruption. In addition to a stock release, other measures listed in the handbook include a range of demand restraint measures and fuel switching, although it is unclear in which situations public stocks or industry stocks would be used.

Emergency oil stocks are held by both industry and the national stockholding agency, OCSIT.

The public stockholding agency, OCSIT, came into operation in 2014 with a mandate to hold Italy’s specific stocks. OCSIT is a state-owned company, operating on a non‑profit basis. OCSIT is owned by Acquirente Unico, a company which is 100% owned by the Ministry of Finance. OCSIT’s oil stocks are held in rented commercial storage terminals and are co-mingled with commercial stocks; the agency has no plans to purchase its own storage facilities.

Since its foundation, OCSIT has gradually increased its total stockholding level. OCSIT aims to increase its stockholding level to 30 days of net imports of ‘specific stocks’ (gasoline, diesel, fuel oil or jet fuel) by 2024, to cover the entirety of Italy’s specific stocks mandate. However, OCSIT’s stock purchases have slowed down considerably since late 2021 due to increased market tightness, leaving some doubt as to whether this objective will be achieved by 2024. In order to facilitate the build-up of OCSIT’s stockholding, MiTE has permitted OCSIT to hold oil stocks as tickets since 2022; individual agreements for the purchase of stocks under ticket arrangements would have to be approved by the MiTE.

The acquisition of stocks held by OCSIT is financed through debt contracted by the company. The cost of the debt and OCSIT’s operating costs are covered via a contribution fee levied on suppliers of oil products in Italy. OCSIT can only sell its stocks when formally ordered to do so by the government. Sales would be carried out through a tendering process; the stockholding agency estimates that the process of releasing stocks would be relatively lengthy, potentially taking up to one month.

In order to reach a total emergency stockholding level of at least 90 days of net oil imports, Italy maintains a compulsory stockholding obligation on industry.

The total level of stocks to be held by industry is set annually by the MiTE as a percentage of inland consumption in the previous calendar year; for 2022, this is 25.4% of the 2021 consumption level. Oil product suppliers that supplied in excess of 50 000 tonnes of oil products in the previous calendar are required to hold stocks at a level proportional to their market share. In December 2021, 215 companies had stockholding obligations.

At least one third of obligated industry stocks must be held in the form of ‘specific stocks’; the remainder may be held as crude oil or refinery feedstocks. As Italy’s oil product demand mix evolves and the potential for further refinery closures increases, the need to hold crude oil stocks will likely decline in the future.

An unlimited quantity of obligated industry stocks can be held outside Italy in other EU member states. Obligated industry stocks and commercial stocks are often commingled, and companies often pay other companies to hold their stockholding obligation. Companies are obliged to make daily reports to the MiTE stipulating the location, product type and quantity of stocks held, including those held abroad. Non-compliance can result in substantial financial penalties.

Around one third of oil-fired electricity generation plants can switch to natural gas in the event of an emergency. However, the effectiveness of this emergency response measure in reducing oil consumption is minimal due to the now negligible share of oil in power generation. The scope for surge domestic production of crude oil is also negligible as active fields operate at or close to their maximum capacity.