Electricity demand in Italy has been stable for around a decade but will inevitably rise in the long term as the government promotes electrification in transport, heating and industry. Demand will likely outpace growth in electricity generation, increasing Italy’s reliance on electricity imports. And as demand rises, Italy will need to install significant amounts of additional variable renewables capacity (estimated by the government at up to 70 GW by 2030) in order to comply with the EU’s Fit-for-55 package, and meet its own long-term decarbonisation goals. The addition of large amounts of variable renewables capacity will necessitate significant planning and investment in the grid, as well as balancing and storage capacities.

Italy has developed a clear set of emergency response procedures for electricity supply disruptions, and various risk scenarios have been outlined in its Risk Preparedness Plan, including cyber-attacks, weather- and climate-related events, and physical attacks on electricity infrastructure. However, while individual risks to electricity security have been clearly identified, there are no clear contingency plans that take into consideration the potential of several risk events occurring simultaneously as well as risk events that have impacts across different geographical regions, generation sources and infrastructure. With regard to the threat of cyber-attacks, the transmission system operator (TSO) has a clear response plan, but a more limited focus on preventive measures.

The Italian transmission network consists of power stations with voltages of 150 kV, 220 kV and 400 kV with a total line length of 74 711 km. The distribution grid is owned by approximately 140 distribution system operators (DSOs). However, four main DSOs deliver most of the electricity.

The TSO prepares the national transmission grid development plan annually. Each plan must undergo a strategic and environmental assessment before implementation. After approval of the development plan, individual projects require environmental impact assessments. Several annual plans are still awaiting approval of the environmental assessment, and subsequently the projects announced in the plans cannot start. The average time required to build major lines is around seven to eight years. In order to meet the 2030 renewables targets, significant new grid infrastructure would need to be built to connect new projects and ensure generation can be brought to load centres.

Pumped storage plants participate in the ancillary services market and the cross-border balancing platforms; they are connected to the 400 kV grid and located in the Alps in the north of the country. For the time being, the contribution of batteries to the dispatching service market is negligible.

According to the TSO, the current storage capacity of 7.5 GW would need to more than double by 2030 if Italy is to meet its renewables targets, with significant contributions from both pumped hydro and distributed electrochemical storage. 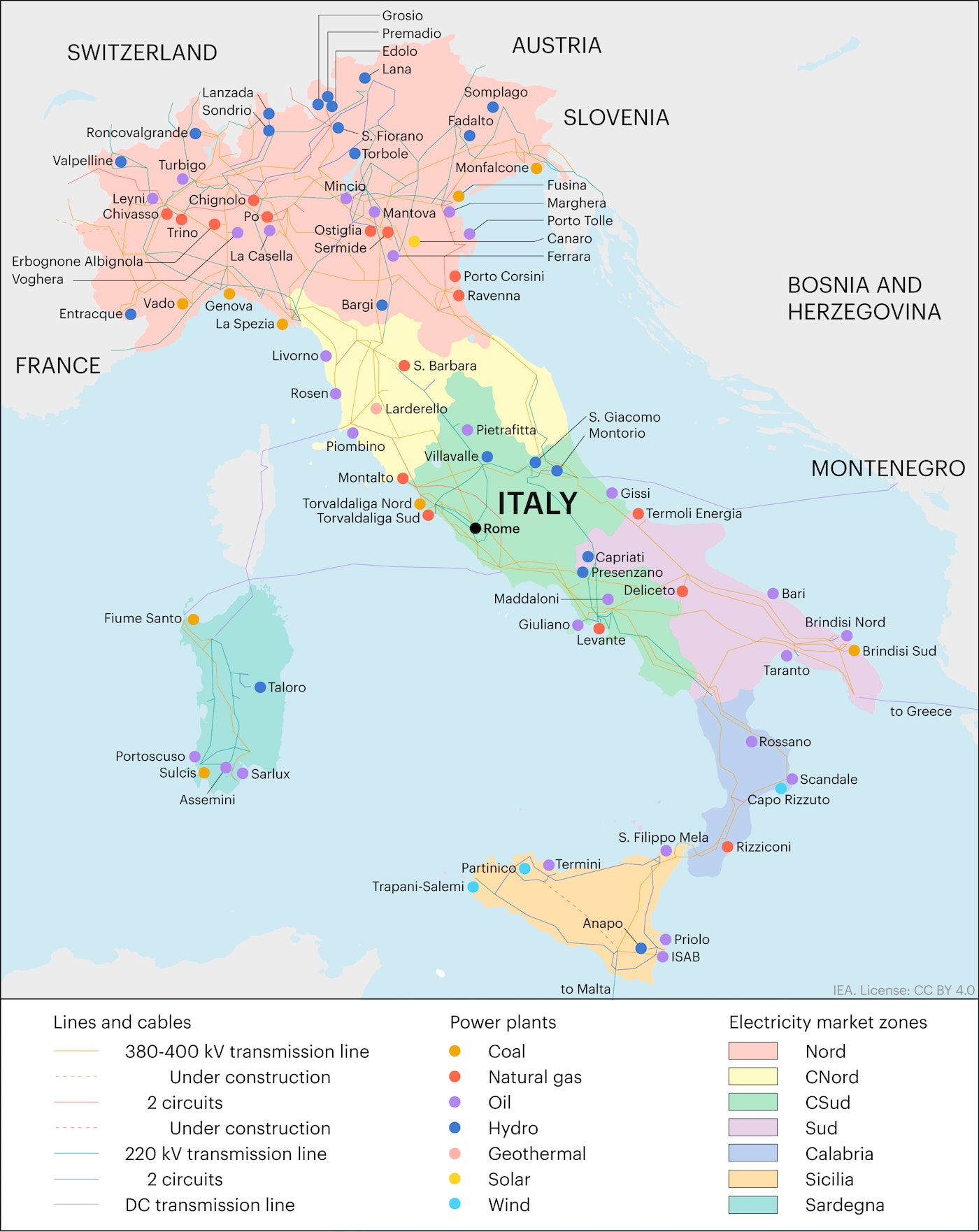 The Ministry for Ecological Transition (MiTE) has operational responsibility for grid management, emergency preparedness. It coordinates the response to electricity supply disruptions to the Terna TSO. DSOs are required to support the TSO with emergency response planning and responding to supply disruptions.

The details of Italy’s electricity emergency response procedures, and the requirements placed on the TSO and DSOs, are outlined in Chapter 10 of the Italian Grid Code, known as the Defence Plan. In accordance with the Defence Plan, the TSO can implement a variety of response measures after activating a state of ‘alert’, ‘alarm’ or ‘emergency’ in the electricity system.

A state of ‘alert’ can be activated if there is a risk of potential supply disruptions resulting from weather reports or concerns raised by DSOs. Under a state of ‘alert’, the TSO would regularly coordinate with DSOs to monitor the situation, potentially postpone maintenance works, and seek to deploy additional personnel and resources to areas viewed to be most at risk.

A state of ‘alarm’ can be activated if ‘alert’ level has already been activated and the situation deteriorates, or if there is high potential for a sizeable supply disruption. Under a state of ‘alarm’, all non-essential works would be suspended, and efforts would begin to secure additional electricity imports.

The TSO would declare a state of ‘emergency’ in the electricity system if it views the situation to be ‘critical’ with imminent or ongoing load interruptions. When the ‘emergency’ level has been activated, the TSO must immediately inform the Regional Security Coordinator (RSC), composed of representatives of electricity TSOs from neighbouring countries, and attempt to find a solution by increasing imports. If this is unsuccessful in resolving the disruption, the TSO can implement rolling blackouts and load shedding to reduce electricity consumption.

The TSO manages a National Control Centre which can coordinate operations through eight Regional Control Centres and three Switching Centres. The control system acquires real-time data relating to the state of the electricity system and implements any corrective measures needed to maintain electricity supply. Each regional Control Centre is responsible for real-time system operation within its own territory. As stipulated in the Grid Code, control room functions must be backed-up in a separate location so the system can withstand any damage to the main installations. Back-up control rooms can be activated under three hours, and must undergo operational testing at least once every year.

At the regional level, the MiTE participates in the European Commission’s Electricity Coordination Group, a platform for the exchange of information and the coordination of electricity policy measures with a cross-border impact. Regional coordination between Italy and its northern neighbours (Switzerland, France, Slovenia, and Austria) is strong. Terna is a member of Coreso, an RSC for electricity in continental Europe.

Italy has a comfortable reserve margin in theory, with a total gross installed capacity around double the highest recorded peak. However, there are some concerns about availability given the relatively high share of variable renewable sources in total installed generation capacity. These concerns contributed to the establishment of a capacity market in 2022. Concerns around the adequacy of generation will likely grow in the future as demand increases at the same time as coal-fired generation is being phased out, while the overall generation availability will decline with additional solar installation.

If rolling blackouts and load shedding are required, the TSO must coordinate their implementation, while DSOs are required to develop individual plans to reduce supply to a level specified by the TSO. DSOs must split their customers into 20 groups specified in the Grid Code, including five groups of protected customers who will not be affected by load shedding. In the most severe disruption, the Grid Code specifies that electricity supply to the remaining 15 customer groups can be interrupted for a maximum of 4.5 hours a day, divided into three periods of 1.5 hours.

The TSO, Terna, has a dedicated unit, Computer Emergency Readiness Team (TERNA-CERT), to respond to cybersecurity threats. TERNA-CERT would coordinate with Italy’s national cybersecurity agency, CSIRT Italia, in the event of a cyber-attack on the electricity system. However, while procedures have been established to respond to potential cyber-attacks, a comprehensive risk assessment on the vulnerability of the electricity system to cyber-attacks has not been carried out. With increasing digitalisation and the rollout of 2G smart meters planned, cyber resilience will become an increasingly critical issue for the security of the Italian electricity sector.