Methane emissions are the second largest cause of global warming. While methane tends to receive less attention than carbon dioxide (CO2), reducing methane emissions will be critical for avoiding the worst effects of climate change.

The energy sector – including oil, natural gas, coal1 and bioenergy – is one of the largest sources of methane emissions, but efforts to reduce them have often been held back by a lack of reliable data. That was why the IEA launched its Methane Tracker last year in an effort to reconcile the various and often conflicting sources of data into a coherent set of estimates. This interactive online tool focuses on emissions from oil and gas operations – the area with the greatest and most cost-effective potential for reducing methane emissions. Now fully updated and expanded in its 2020 edition, the Tracker provides a comprehensive picture of these emissions across more than 70 countries – as well of as the technologies and measures that can bring them down.

Alongside the IEA’s Tracker, various other initiatives are underway globally to improve the world’s understanding of the magnitude and nature of methane emissions from the oil and gas industry. This update of the Methane Tracker includes not only the latest IEA estimates but also, for the first time, comparable data from other sources. The update also greatly expands the explanatory material on the strategies for measuring methane emissions and the options for reducing them.

Methane emissions are the second largest cause of global warming

Our new estimates for 2019 show a slight rise in methane emissions from oil and gas compared with the previous year, but there is a great deal of uncertainty over what might happen in 2020. In the case of CO2, it seems almost certain that global emissions will fall this year because of the global slump in economic output, transport activity and fossil-fuel combustion caused by the coronavirus (COVID-19) pandemic.

This highlights that energy market trends are not the only force affecting methane emissions from oil and gas. Fluctuations in these emissions also reflect choices made by individual operators and policy makers. Where there is a concerted drive to reduce them, they go down; and the reverse also tends to be true. Our Methane Tracker shows that methane leaks are not an inevitable part of today’s oil and gas business. They can be reduced cost-effectively – and this has to happen if the world is to address climate change.

In this article, we examine four key areas in the measurement of methane emissions and efforts to reduce them:

Methane trends in 2020 are more uncertain than carbon

One of the most recent and promising advances in understanding the level of methane emissions worldwide is the use of satellites. Various different satellites in operation today can provide estimates of the atmospheric concentration of methane across geographic areas.

For example, the satellite Sentinel 5P (Precursor), part of the European Space Agency (ESA) Copernicus program, provides readings of methane concentration across areas of 5 km by 7.5 km, covering the whole world on average every four days. The satellite GHGSat covers a much smaller area each day but can provide data at a very fine spatial resolution (around 50 m by 50 m). The coverage and accuracy of these readings is only going to improve, especially with the envisaged launches of the Environmental Defense Fund’s MethaneSat, ESA’s Sentinel 5 and additional satellites from GHGSat.

A key advantage of satellites is that they can help locate large emitting sources promptly. Once a leak has been found, it can often be fixed relatively quickly. Previously, leak detection mainly relied on the use of handheld thermal cameras to identify sources of emissions, which could be slow and cumbersome. Satellites and other aerial measurement methods, such as drones or planes, can provide a much quicker and more comprehensive view.

Satellites can also help improve our understanding of the nature of methane emissions from oil and gas facilities. Readings of changes in the atmospheric concentration of methane can be used to estimate the rate of emissions from a source that would have caused such a change.

Data analytics firm Kayrros has used readings from the satellite Sentinel 5P to detect and interpret large methane plumes across a number of oil and gas producing regions. For example, Kayrros analysts spotted plumes coming from three different oil and gas facilities in Algeria in January 2020. These plumes were caused by sources emitting more than 25 tonnes of methane per hour. A methane leak of that scale is roughly equivalent to the CO2 emissions from a 750 megawatt coal power plant. 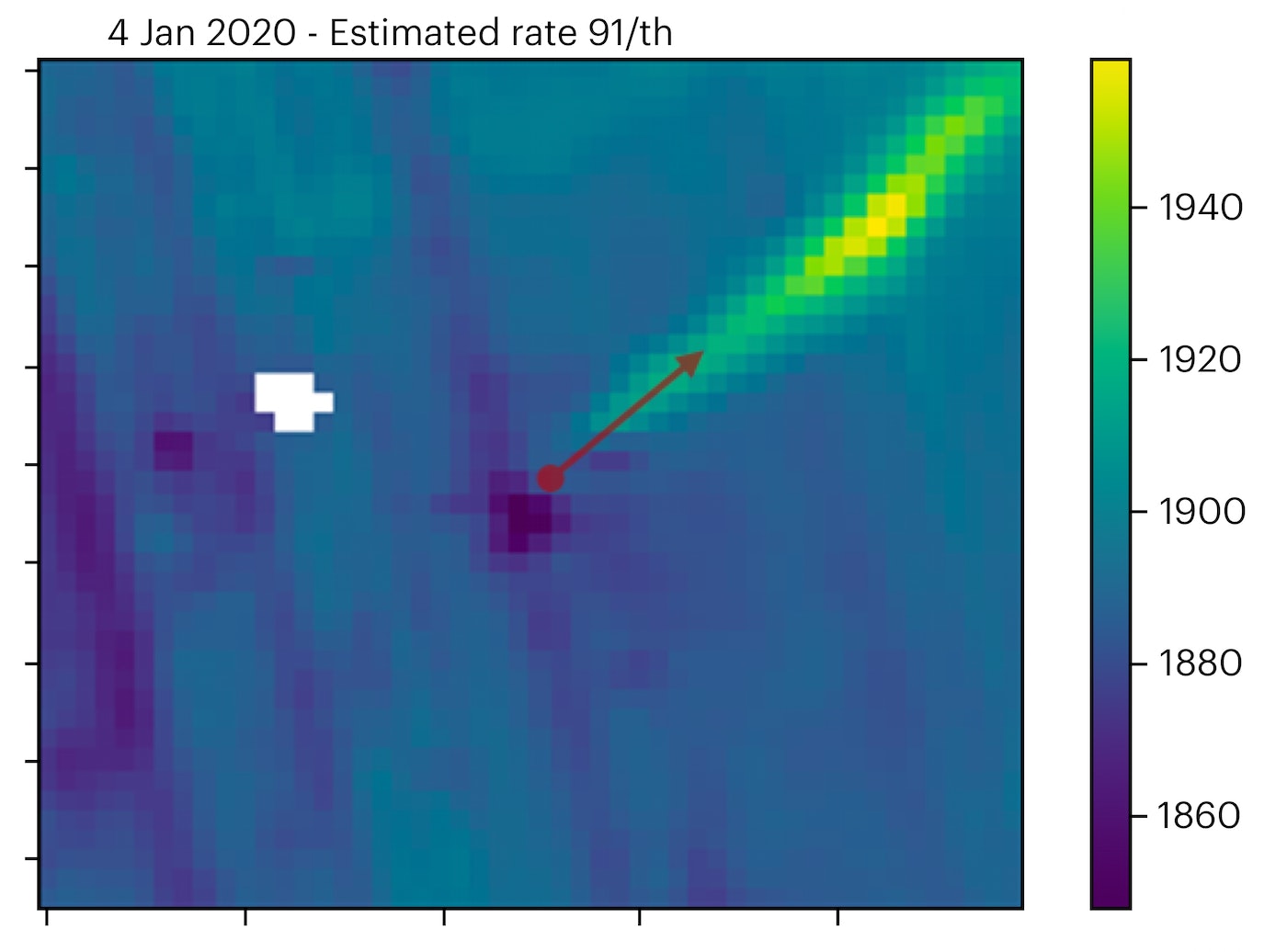 While the duration and location of these huge plumes can vary considerably, Kayrros detected an average of about 100 of them worldwide at any one time. Oil and gas operations are believed to cause around half of them, with the remainder coming from coal mines, agriculture and other sources. On an annual basis, these ultra-emitting oil and gas sources would result in just over 10 million tonnes (Mt) of methane. That is around 15% of our latest estimate of global methane emissions from oil and gas. A critical question for the industry and for policy makers across all countries is how to tackle these very large emissions sources.

The increasing amount of data and information from satellites will continue to improve global understanding of methane emissions levels and the opportunities to reduce them. However, satellites do have some limitations:

The ability to identify big leaks by satellite will not solve the challenge presented by methane emissions from oil and gas by itself. Tackling them requires companies to pursue and maintain high operational standards, and policy makers to put in place well-designed regulations.

In addition to data from satellites, a number of organisations have carried out aerial campaigns from countries such as the Netherlands and Norway to measure data for oil and gas activities in the North Sea.

A key emerging insight from these campaigns is that the companies doing the most to address methane emissions from their operations are generally achieving better results than we had previously assumed. At the same time, it is becoming clearer that methane emissions could be considerably worse than we had previously estimated in countries that have lax regulatory oversight, weak rule of law, poorly functioning oil and gas industries – or all three.

Along with the latest data on oil and gas production, we have updated our estimates of methane emissions from oil and gas operations in 2019. The Methane Tracker now also provides official, audited or peer-reviewed estimates from other groups, institutions or data sources that can be directly compared with our estimates. There is a wide range in these estimates at the global level and for individual countries, highlighting the uncertainty that remains. Continued efforts are undoubtedly needed to expand and deepen measurement activities and to improve data transparency.

Our Methane Tracker provides estimates for the ways in which methane emissions from oil and gas can be reduced. Since methane is a valuable product and can often be sold if it is captured, this revenue can help offset some of the costs of deploying the measures needed to prevent the emissions. Natural gas prices are obviously a crucial variable in this calculation. While natural gas prices today are relatively low, we estimate that around one-third of our latest estimate of methane emissions from oil and gas operations could still be avoided at no net cost.

Nonetheless, because methane is such a potent greenhouse gas, even those measures that cost more money than they save are still a very cost-effective way to reduce emissions. For example, with a greenhouse gas price of only $15 per tonne of CO2-equivalent (well below what many companies claim to be using to screen their upstream investments), it would be cost effective to deploy all measures that cost less than $10 per million British thermal units.

The message is clear: even with an over-supplied gas market, reducing methane emissions from oil and gas operations is amongst the lowest of low-hanging fruit for mitigating climate change. Even as energy markets are buffeted from all angles, companies and policy makers cannot afford to lose sight of this potential.

Governments can play an important role in helping the oil and gas industry tackle its methane emissions by addressing critical gaps in information, infrastructure and investment. They can also align incentives to ensure companies take the necessary actions.

Several jurisdictions are considering adopting new regulatory actions on methane or updating existing ones. The European Commission, for example, is preparing a first-ever strategic plan to reduce methane emissions in the energy sector, with a particular focus on improving measurement, reporting and verification. Elsewhere, in a move facilitated by the UN Environment Programme, Nigeria and Côte d’Ivoire announced in January that they would join the Global Methane Alliance. They made commitments to step up efforts on methane emissions from oil and gas operations within their borders.

The IEA Methane Tracker aims to help governments understand the magnitude of methane emissions within their borders and provide up-to-date information on regulatory and policy approaches to reducing emissions. In addition to an expanded database of methane regulations across key jurisdictions, the updated Tracker incorporates new insights on how policy and regulatory approaches can incentivise the adoption of different abatement technologies and measures.

The picture revealed by our latest updates to the Methane Tracker is a sobering one in many ways. Estimated emissions from oil and gas operations remain very large. Moreover, the health and economic crises caused by the coronavirus are naturally dominating the near-term agendas of companies and policy makers.

However, there are grounds for a more upbeat view. Methane emissions are large, but the evidence makes it clear that a substantial amount can be reduced cost-effectively. The best-performing companies and countries are showing the way. And advances in measurement capabilities and data transparency mean that disparities in performance between companies and countries will be increasingly visible, making it harder for laggards to go unnoticed. This remains a huge opportunity to reduce greenhouse gas emissions – not just for 2020, but for good.