France's energy policy priority is to achieve climate neutrality by 2050 by decarbonising the energy sector, and energy security measures will have to adapt to rapidly changing market realities. Energy policies assume steep reductions of oil and gas consumption from 2020 through to 2030 – by 30% and 25% respectively; while electricity consumption is seen growing by up to 46% between 2020 and 2050. France is dependent on foreign suppliers for crude oil, petroleum products and natural gas, but is a net exporter of electricity. It is important that the government continues to engage with key stakeholders to ensure security of supply is maintained during the energy transition.

France has a comprehensive legislative and regulatory framework in place to respond to an oil emergency. The framework is based on stockholding obligations for industry, facilitated by a stockholding agency (Comité Professionnel des Stocks Stratégiques Pétroliers, CPSSP) and an association of oil operators (Société Anonyme de Gestion des Stocks de Sécurité, SAGESS). The Directorate for Energy, a unit of the Ministry of Ecological Transition (MET), is responsible for managing oil supply emergencies. Regulations require that oil stocks in France are sufficient to meet the IEA and European Union (‘EU’, hereafter) requirements, and that the country can draw stocks in case of a domestic or international emergency.

France imports almost all its oil by sea. Crude oil comes mainly through the ports of Le Havre (30%), Marseilles (35%) and Nantes-Saint-Nazaire (12%). Refined products are also mainly imported by sea, but come also from neighbouring countries by road, pipeline or by river (Belgium and Germany).

Crude oil pipelines in France connect import depots and refineries.
The main ones are:

Some pipelines supply both distribution depots and refineries with crude oil and finished products:

Total is the biggest operator in the country with four refineries (Donges, Feyzin, Gonfreville and Grandpuits), Esso operates sites in Gravenchon and Fos; and Petroineos owns the refinery in Lavera. Refineries are mainly concentrated in two zones: the Marseille-Fos area with two refineries, and the Basse-Seine area with another two facilities. Isolated refineries are those of Donges (region of Grand Ouest), and Feyzin (Lyon).

La Mède refinery, operated by Total, was closed in 2016 and reopened in July 2019 as France’s only biorefinery and one of the largest in Europe. The shutdown of the Grandpuits refinery was announced in September 2020, motivated primarily by repeated failures of the Île-de-France pipeline that supplies it with crude oil. Refining ceased there in the fourth quarter of 2020 though storage of petroleum products will continue until the end of 2023. The site will be converted into a “zero oil platform for biofuels and bioplastics” – the second biorefinery in the country and the site of advanced circular economy and biomass activities is expected. It is expected to start operations in 2024.

All three refinery operators in France have been upgrading the efficiency of their plants. However, the structural decline in European demand for petroleum products and the growth of more competitive refineries abroad (including the United States, Asia and the Middle East), are weakening prospects for French refining.

The distribution of storage capacities in France is not homogeneous. The proximity of refiners, import sites, but also massive transport infrastructure for petroleum products, influences their location. The Normandy and Provence regions alone represent 48% of national storage capacities. To a lesser extent, the Nouvelle Aquitaine and Hauts de France regions stand out with 18% of capacity due to the presence of large import depots. Île-de-France and the Auvergne-Rhône-Alpes region, with 8.6% and 6.4% respectively, also represent a significant share which is due to the significant economic activity of these areas. Finally, the 7 other regions together represent only 18.4% of storage capacity of the country. 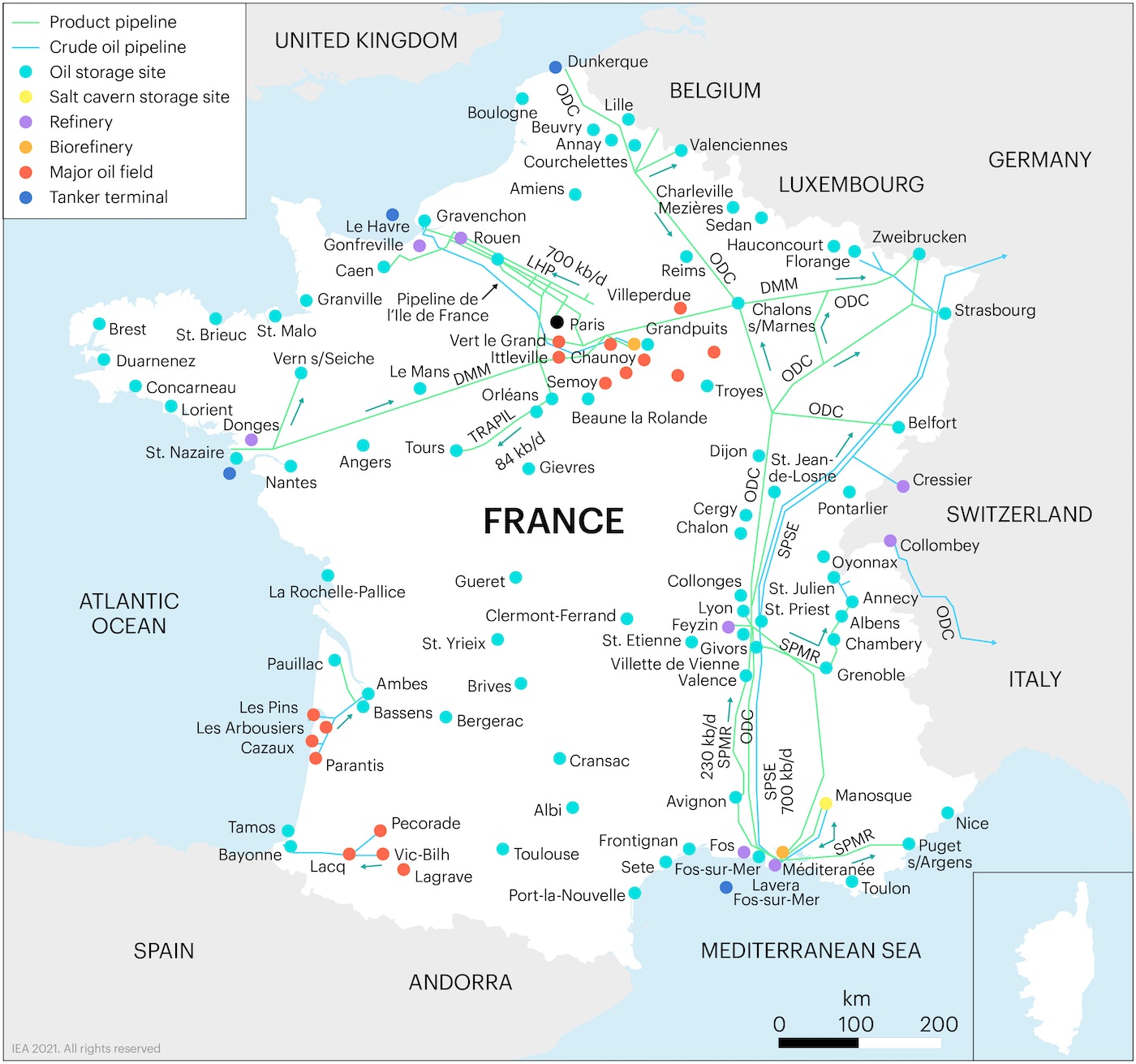 France’s response to an oil emergency is primarily based on releasing oil stocks held by the industry. Active market entities, high quality and accuracy of data reporting, and both public and private institutions engaged in the response policy, allow for efficient coordination between the country’s administration and market players. The direct supervision by the Prime Minister, in liaison with the President of the Republic and the Minister overseeing the energy sector, ensures that the French oil emergency system is familiar to entrepreneurs, constantly tested and can be effectively launched.

The legal basis for the national emergency response is found in the Energy Code, Application decree of 15 March 1993 concerning constitution of strategic oil stocks in mainland France; Application decree of 17 September 2015 concerning oil products releases and Order of 25 March 2016 relating to the constitution of strategic oil stocks. These pieces of legislation provide the French government with powers to guarantee that oil stocks in the country are sufficient to meet the IEA and EU requirements, and that it can draw stocks in case of a domestic or international emergency. The legislation provides the French government with further broad powers to respond to other emergencies, such as those regarding public welfare, public order, international crisis, or war.

France has also elaborated a Hydrocarbons Resources Plan (Plan de Ressources Hydrocarbures, or PRH), which serves as an emergency handbook to manage various types of oil emergencies, laying out step-by-step procedures and the responsibilities of different state and market actors during emergencies. In addition, the National Localisation Plan of Stockholding sets the rules of oil stocks’ deployment throughout the country, to assure their immediate availability to consumption centres. It also reflects the decentralised French administration, where certain roles during emergencies are delegated to Prefects of Regions and Departments. PRH sets also a list of pre-identified entities of high public importance, which shall be served with emergency supplies in a first place during a crisis.

In the event of a crisis, the Prime Minister activates the “Interministerial Crisis Cell” and names the Ministry in charge of energy to lead the cell. The Roquelaure Crisis Centre in the Ministry would operate as a communication cell by using the means of the Ministerial Operational Centre of Monitoring and Warning, to manage the crisis and coordinate between the administration and the market.

The French National Emergency Strategy Organisation is not defined by legislation, but would have the following structure, with all elements taking part in the oil crisis management:

Oil stocks in France have consistently been above the 90-days required by the IEA.

Industry stocks are not subject to localisation requirements, nevertheless companies with a stockholding obligation must provide information every February on the location of their stocks and keep the administration informed of any change in their stockholding capacities, whether owned or rented. Once a year, the MTE approves the strategic stocks national localisation plan.

The industry bears the financial burden for strategic stocks. Obligated companies pay a monthly fee to the CPSSP (proportional to the amount of fuel released for consumption) to cover costs. Nearly all SAGESS stocks are financed by permanent bank loans totalling approximately EUR 4.5 billion.

The French stockholding policy favours stocks being held as close to the final consumer as possible. However obligated companies may maintain up to 10% of their strategic stocks outside France in fellow European Union member states. Prior agreement has to be signed between the respective Administrations, and authorisation is only given if the company faces a cyclical lack of capacities in France or short-term supply difficulties. Industry can store up to 10% of its total obligation outside France only if a special situation occurs, such as sudden closure of major installations.

So-called ''ticket'' stockholding arrangements are allowed, but only by authorised warehouse keepers.

Obligated companies must send monthly reports and the administration can carry out in situ audits. Non-compliance situations can lead to severe penalties.

CPSSP and SAGESS are the two bodies responsible for France’s oil stockholding system.

CPSSP, is a legal body representing various oil organisations and representatives of relevant ministries. Under the Law of 31 December 1992 reforming the petroleum regime, the sole mission of the CPSSP is to constitute and safeguard stocks of crude oil and oil products to cover the part of the stockholding obligation of oil operators as attributed by law to the CPSSP. In practice, the CPSSP is an intermediary between market operators obliged to maintain stocks and the SAGESS that actually stores oil on behalf of these market operators (85% of CPSSP’s obligations is delegated to SAGESS). CPSSP has no particular role in case of oil crises. Although the agency is a private entity established by market operators and does not make part of administration, two of the thirteen administrators’ seats of CPSSP are held by the Ministry of Economy and the Ministry of Budget. The DGEC attends board meetings in an advisory capacity. Decisions of the board can be vetoed by the government.

SAGESS is an association established in 1988 by the oil operators where shareholding is allocated in proportion of their market shares. SAGESS’s role is to maintain strategic stocks of oil in order to contribute to the fulfilment of obligations defined by national and international standards, and to enable its shareholders to delegate their stockholding obligation. SAGESS is directly responsible for releases during a crisis, upon DGEC’s decisions. The Ministries of Ecological Transition, Budget and Economy attend the SAGESS boards in an advisory capacity. Any board decision can be deliberated once again on one of these three Ministers’ request.

France places a stockholding obligation on all companies that sell oil products on the domestic market. Oil operators are divided into two groups according to their customs status: authorised warehouse keepers or registered consignees. SAGESS does not own storage facilities, but is the owner of large quantities of physical oil stocks (65% of all oil volumes in the country). As of June 2021, SAGESS managed 13.6 million tonnes (Mt) of stocks, the majority of which is dispersed throughout a large number of storage locations in France (91 locations in 2020), including 41.6% of volumes held in salt caverns near Manosque in south-east France, 43.1% in storage depots, and 14.1% in refineries. Emergency stocks are typically comingled with commercial stocks of companies, while segregated stocks are mostly held only in caverns. At the end of 2020, SAGESS’s stocks were held in diesel (48%), gasoline (8.2%), kerosene (8.1%), heating oil (4.4%) and crude oil (31.3%), reflecting the market’s composition.

Specific to the French system, industry operators request the government (DGEC) to release stocks from the strategic reserves on a daily basis, which is much more frequent than in any other IEA country. The comingling of SAGESS stocks with commercial stocks, along with highly optimised industry distribution systems with very low volume margins, has decreased the industry’s ability to respond to local supply constraints with their commercial stocks, leading to an over reliance on the strategic stocks. Thus, in practice, the stocks of CPSSP act at least partly as a “joint operational stockpile” of industry, rather than as strategic stocks for severe emergencies. Notwithstanding the industry’s overreliance on strategic stocks, the stockholding system is well established and understood by all relevant entities and provides the administration with the flexibility to quickly respond to frequent local crises or an IEA collective action.

Demand restraint measures have a rather limited role in France and are seen as a last resort option, although the government has tools to limit oil demand to the IEA standard of up to 10%.

Demand restraint measures in France are set out in the PRH, a catalogue of 89 measures written in 2003. In case of an oil supply disruption, the PRH could by triggered by the order of the French Prime Minister. Local authorities would then issue orders for local implementation. These 89 measures are classified within six scopes: transport of person or goods, private or public premises, industry and others. There is also the seventh scope dealing with administrative measures.