The public oil stocks managed by the Petroleum Agency (APETRA), the Belgium public stockholding entity, is a key component of Belgian oil emergency policy. There is no compulsory stockholding obligation on the oil industry. Roughly 60% of APETRA’s emergency oil stocks are held in tank farms in neighbouring countries under bilateral agreements.

The Port of Antwerp is Belgium’s main sea terminal for oil trade (both crude and oil products), and is a major refuelling site for international shipping. The Port of Antwerp is also home to most of Belgium’s refining and chemical production capacity. The smaller Port of Zeebrugge is served by two oil products pipelines and has a storage for marine bunker fuels and a shipping refuelling terminal.

The Rotterdam Antwerp pipeline (RAPL) is Belgium’s only cross border pipeline for crude oil. The RAPL connects the major crude import terminals and refining facilities of the Port of Antwerp and the Port of Rotterdam in the Netherlands and has a capacity of 575 kb/d. Historically, the RAPL was used to deliver crude oil from the Netherlands to Belgium, but since 2016 it has been used to export refinery feedstocks from Belgium to the Netherlands. The Port of Antwerp includes over 1000 km of pipelines for around 50 different oil products.

Belgium’s four refineries are strategically located near the Port of Antwerp and have a combined crude distillation capacity of 679 kb/d equivalent to 33 million tonnes (Mt) per year. The refinery owned by Total (with a capacity of 353 kb/d) and the refinery owned by ExxonMobil (with a capacity of 326 kb/d) together account for 85% of Belgium’s refining capacity. Both can produce a high yield of light and middle distillates, and are among the largest refineries in Europe. Notable improvements were made in both of these refineries in 2018 and 2019, greatly improving the thermal cracking-coking capacity and increasing the output of lighter oil fractions.

Belgium has 50 oil storage facilities with a total capacity of 110.4 mb, mainly for oil products. All oil storage capacity in Belgium is privately owned and operated, and is used mainly to support commercial operations but also provide emergency reserves to address supply disruptions. The majority of Belgium’s oil storage (44%) is located at the Port of Antwerp to support its large concentration of refineries and petrochemical facilities. 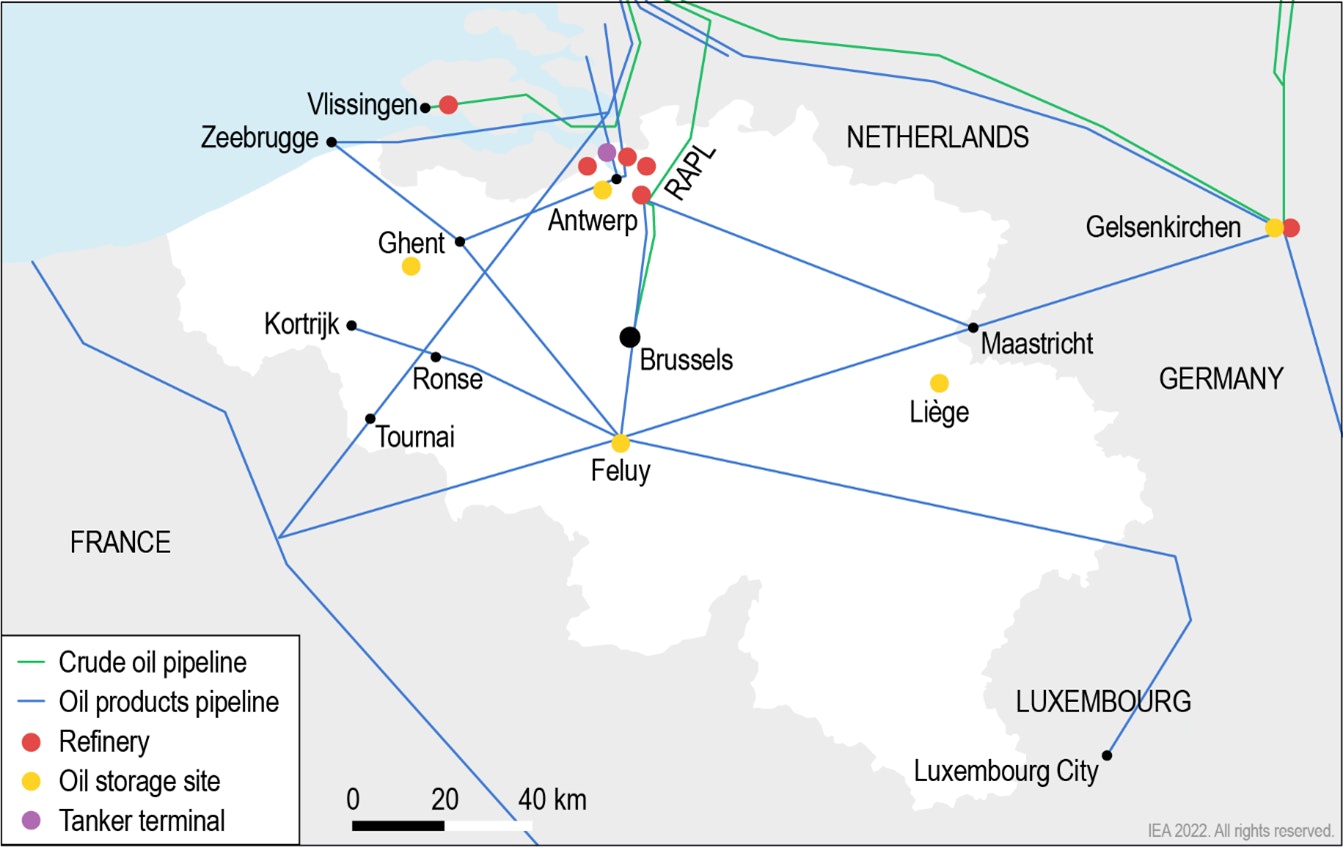 Stock drawdowns are the key component of Belgium’s oil emergency response. APETRA is a public company owned by the federal government that is responsible for purchasing and managing emergency stocks of crude oil and oil products to ensure Belgium’s security of oil supply and to meet international oil reserve obligations. APETRA holds oil stocks under long-term contracts in private storage facilities, and is funded by a fee charged on most oil products consumed in Belgium.

The National Oil Board (NOB) is responsible for the supply and distribution of crude oil and oil products during emergency situations. The NOB is also responsible for activities related to Belgium’s international commitments in energy crisis management. The NOB is an advisory body comprised of representatives from the Directorate General of Energy (DGE), APETRA, and the cabinet of the Minister and the crisis cell of the Federal Public Service Economy.

In the case of an oil supply crisis, the NOB coordinates with and advises the federal Minister for Energy and the Council of Ministers on the method, duration and amount of the stock release. The Board also organises emergency response exercises in collaboration with APETRA and communicates with the oil industry on a regular basis.

According to the CSA, the federal Minister for Energy is entitled to decide to temporarily use part of the compulsory emergency stocks and may authorise a temporary reduction. In case of potential international or national supply problems, if the DGE decides that the NOB should meet and should the NOB deem that there is a crisis situation, this advice is transferred by the DGE to the federal Minister for Energy. Upon approval by the Minister, the NOB shall advise on the nature, amount and duration of stocks to be released and implement crisis measures in close coordination with APETRA.

Belgium meets its stockholding obligation to the IEA by holding public stocks managed by APETRA. According to the CSA, APETRA needs to hold oil stocks equivalent to at least 90 days of net imports, of which at least 30% should be key product that account for more than 75% of oil product demand, such as diesel, heating oil and gasoline. The CSA requires that APETRA’s crude stocks should be less than 60% of APETRA’s total stocks and product stocks held abroad should be less than 30% of total product stocks.

All Belgian oil emergency stocks are APETRA’s agency stocks; there is no compulsory stockholding obligation on the Belgian oil industry. Approximately 60% of APETRA’s emergency oil stocks are held in Belgium, consisting almost entirely of middle distillates (98%) and motor gasoline (2%). The remaining share of emergency oil stocks are held in neighbouring countries (France, Germany and the Netherlands), the bulk of which (89%) as crude oil stored in caverns in Germany.

Belgium has at its disposal a number of dormant decrees which the Minister of Energy could activate after deliberation by the Council of Ministers.

There are no volumetric estimates for each of the separate demand restraint measures, but the total impact of all measures is estimated to be less than 5% of total oil consumption. The NOB has compiled a crisis management manual that includes updated lists of the priority end-users of petroleum products. These lists serve as a reference for drawing up ministerial decrees regarding demand restraint measures that focus on specific products or consumer groups.

The Belgian government has compiled a crisis management manual that includes updated lists of the priority end-users of petroleum products. These lists serve as a reference for drawing up ministerial decrees regarding demand restraint measures that focus on specific products or consumer groups.

Measured in days of net imports